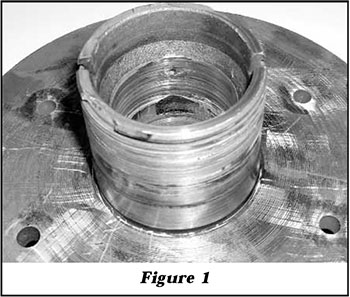 Most transmission technicians who work on rear-wheel-drive Chryslers are all too familiar with the devastation associated with poor lubrication. Galled governor supports, galled and/or seized output shafts, or rounded sun and planetary gears are all common failures (see Figure 1). Although towing a vehicle with the drive wheels on the ground will yield the same results, the vast majority of failures are caused by a simple lack of or insufficient lubrication.
To find out why your transmission has failed, the first test you should perform is to check the rate of flow at the cooler return line where it meets the return line fitting at the transmission. One quart in 20 seconds is a good minimum specification. If you don’t have sufficient flow at the cooler return line, you’ll want to verify that there is good flow coming to the cooler circuit. You can do this by checking the rate of flow as it exits the transmission before entering the cooler circuit.
If the flow rate is acceptable when it enters the cooler circuit, you must then isolate the individual components of the circuit to determine where the restriction lies. Don’t overlook secondary auxiliary coolers, inline filters, inline check valves or even check valves located in the cooler fittings.
The A500 and 518 transmissions have been around since 1988, but converter draindown was not significant enough to warrant an inline check valve until 1994. In 1994, the 3-land switch valve was replaced with a 4-land valve. The 4-land switch valve altered the converter feed circuit, increasing the probability of drainback, making the check valve a preventive measure. The boost valve tube was also added at this time, making the valve bodies easy to identify.
In 1996 the checkball was upgraded to Viton® for increased durability (see Figure 2). Inside the check valve with the ball you will find a spring and spring seat (see Figure 3). The spring seat works like the strainer on your floor drain or shower stall debris catcher. The spring collapses as cooler flow increases, making it an additional debris catcher. If you disassemble an inline check valve after a converter clutch failure, the spring and seat will look like a cyclone fence after floodwaters have receded. Technicians have reported finding as many as three individual checkballs in one check valve. Checkballs that have increased in size are also common (see Figure 4).
The Wynns-Precision Inc. O-ring Handbook tested 675 commercial fluids and chemicals on nine different elastomers. The fluids ranged from water to acid and included such favorites as ketchup, coffee and Coca Cola®. The elastomers (polymers) range from Nitrile to TFE propylene (3M trade name AFLAS). Since the fluorocarbon (Viton®) is the elastomer most widely accepted by the transmission industry, we will zero in on it.

The Wynns-Precision Inc. O-ring Handbook used this rating guide:
Of the 675 commercial fluids and chemicals tested, a full 20 percent (136) tested unsatisfactory on Viton®. With this high percentage of unfavorable results, the chances of some amateur chemist moonlighting as one of your transmission technicians flushing a cooler with a substance that will affect the checkball in the check valve is pretty good.
You may have good flow through your cooler and still have a lube-related failure. If you check the rate of cooler flow as you drive down the road, you’ll see that as the line pressure increases in response to increased TV, the cooler flow decreases. If you check a vehicle with a Cummins diesel motor, with an increased GVW or towing a trailer on a long grade, you will see the cooler flow decrease to almost zero. Drilling line to lube will help the lube problem but will also cause a draindown problem. The best way to address this problem is to install a pressure regulator valve with the line-to-lube passage incorporated into the valve and a check valve to prevent converter draindown. This also puts the check valve upstream of the converter (the most debris-causing culprit.) With the check valve in the pressure regulator valve, you no longer need the check valve in the line.
You will be able to sleep a lot better not worrying about the inline check valve or what fluid your technician is using to flush the coolers.
Special thanks to Sean Byrd, forensic technician for Jasper Transmissions, and Brenda and Bob Warnke of Sonnax Industries Inc.