Opening up a torque converter and finding what looks like a strawberry milkshake inside is fairly common in the rebuilding industry. The strawberry milkshake appearance is the result of ATF being contaminated by water. A small amount of water mixed with transmission fluid will change the appearance of the fluid dramatically. Since many shops have limited areas available for storing cores, some cores are open to the elements. Transporting cores in open vehicles also increases the opportunities for water contamination. 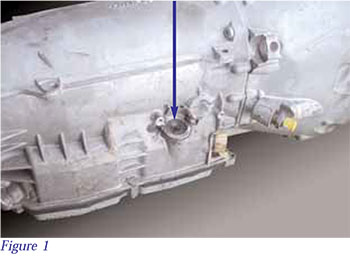 A small amount of water in a non-lockup converter is usually not a problem, provided it is removed in a reasonable amount of time. However, if the water remains in the converter long enough to show signs of rust on the ferrous metals or oxidation on the non-ferrous metals, you will probably have either bearing or stator clutch issues. There are additional concerns with water contamination in a lockup torque converter. With the exception of high carbon or woven carbon friction materials, all lockup clutch linings are paper-based. When a paper-based TCC clutch is exposed to water, it’s only a matter of time before a failure occurs. The friction material will either delaminate or the material will separate from the piston at the bond line because of rust.

When a higher-than-normal number of converters are found to be contaminated with water, there’s usually a common source that must be found. This was the case with the converters for the 2005 Jeep Grand Cherokees equipped with the 3.7L engines. The fill tube oil seal was allowing water to enter the transmission (see Figure 1). Most customers were unaware of the water in their transmissions. Some only noticed a TCC shudder or a slight buzzing noise. Daimler Chrysler became aware of the problem and issued Service Bulletin (SB) #21-011-05 REV. A. In October 2005 this bulletin was canceled and Safety Recall E13 was issued. The Safety Recall was issued because if the water entering the transmission is left unchecked, it’s possible for the fluid to rise to a level to cause foaming by the moving parts, and the expanding foam could escape onto the exhaust. 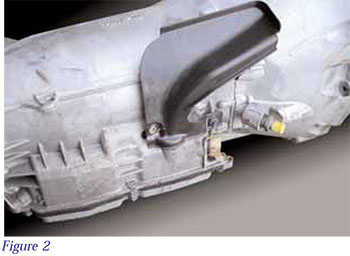 Recall E13 will replace the fill tube oil seal and add a water shield onto the fill tube above the seal on all affected vehicles at no charge to the customer (see Figure 2). If the seal is found to be leaking, the transmission fluid is flushed and the torque converter is replaced – also at no cost to the customer. Although the seal and water shield seem to prevent water from entering the transmission, some shops have opted to take some extra measures for protection.

Because of the proximity of the air conditioner evaporator drain, some shops have attached a 24-inch piece of 5/8” heater hose to the drain. The hose is routed along the firewall and exits near the passenger side frame rail. Care must be taken not to use a piece of hose that is too long: If it is, the hose will either come into contact with the exhaust or extend into the air stream and create a noise.

The fill tube oil seal and water shield package (including extra bolt wire harness shield) are sold as part # CBLOE131 for just over $5. If you have a similar vehicle that is not covered by the recall, you might want to consider this update.