Some GM vehicles with 4L60-E transmissions and 300 millimeter converters are reporting higher than normal pump gear failures. Affected vehicles are 2002-2003 Bravada, Envoy, and the Trailblazer (Dacco B-85 VJCX) equipped with the 4.2L engine. An easy way to identify this converter is that it is the only GM 300mm unit whose impeller fits inside the front cover rather than vice versa. 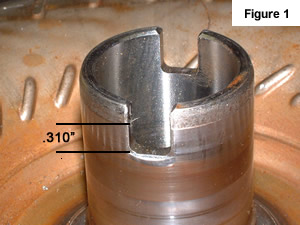 One possible cause of pump gear failure could be insufficient engagement of the impeller drive hub into the pump gear due to excessive "stab depth". Stab depth measurement can be used as a method to evaluate a hub's engagement into the pump gear. To check the stab depth of a converter, bolt the transmission to the engine and push the converter into the pump until the converter drive slot bottoms on the lugs of the pump gear. Once in place, measure the gap between the flex plate and the mounting pads of the converter. This measurement should be a minimum of .125" to avoid damaging or destroying the pump but not more than .250" to prevent pump gear failure. If you only have the converter and do not have access to the vehicle, you can get a rough idea of the stab depth by measuring the distance from the witness marks of the lug contact area of the impeller hub to the bottom of the drive slot.

This distance in Figure 1 measures about .310", which is the same measurement that was obtained when the stab depth was checked in the vehicle.

How to Fix the Problem

There are three different approaches being used to rectify this problem, but only one good one. 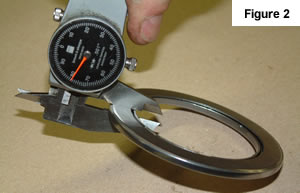