No Lockup for No Reason? 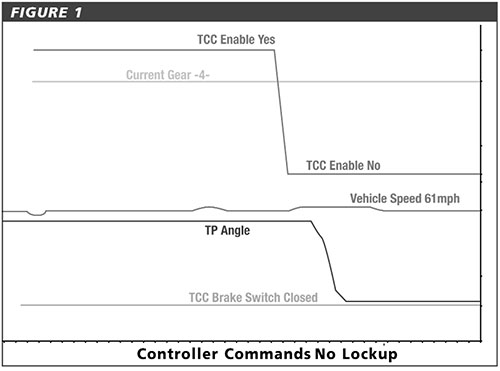 Here’s a real-life example of a problem that came into our shop. A 1998 Chevrolet pickup with a 4L60-E was brought in with complaints of no reverse, no 2nd and no 4th gear.We figured this was a routine job. In fact, it’s usually a “gravy” job.We started the job by scanning for codes and found a P1870 and a P0300.
The P1870 (transmission component slipping) could have been the result of a stripped reaction shell, or it could have been a TCC problem. A quick look at the freeze-frame data on the scanner had us leaning toward believing the P1870 was being caused by the no 4th condition. Either way, the cause of no 4th and the TCC system were all going to get covered during the overhaul, so we figured we had that code covered.
P0300 is a random engine misfire code. Because we don’t specialize in engine performance, we noted the code on the invoice for reference only. Both P1870 and P0300 are common codes we see quite often.
A quick test drive verified the complaint, and our initial thought was that the problem was stripped reaction shell splines. We called the customer and received the authorization for an overhaul. Everything was going great, routine.We got it out and, sure enough, the reaction shell was stripped. So we did a basic overhaul.
When we got to the valve body – with the thought of the P1870 in the back of our minds – we ran a Wet Air Test and found the TCC regulator bore was worn, so we repaired the worn bore.
Everything was going fine and the customer called mid-afternoon to check our progress.With the unit ready to go back in, we told him that if everything went well, it would be ready the next day. That gave us plenty of time.
About 4:30 p.m. we filled it up with fluid and got ready for a test drive. After about 10 minutes I got word that the truck worked and shifted great. But ... it had no lockup. The technician said he thought he felt it lock up one time. What is it with 4:45 p.m. and no lockup? So I grabbed the scanner and took it for a test drive and, just as noted by the other tech, it had no TCC apply. I scanned for codes and there were no codes. I took a quick look at the TCC data and saw that the Vehicle Control Module was commanding the TCC enable: NO.
It was snapshot-movie time. A quick word on snapshot-movies: I feel they are the safest way to diagnose problems like this. (If you think talking on a cell phone and driving is dangerous, you should see how I drive with my nose rubbing a scanner’s screen.) So I took a snapshot and put it on the shop’s computer to study the data (see Figure 1). After several minutes of looking at the data I saw no reason to stop it from applying the converter clutch. The throttle position sensor, brake, speed, coolant temperature, rpm and any other data that could cause the VCM to not apply the converter clutch all looked fine (see Figure 2). 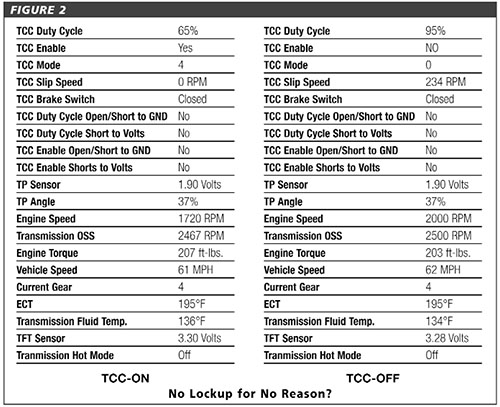 Being a little confused, I decided to go for a test drive and use the scanner’s special functions to bi- directionally override and apply the TCC to see if it worked. Sure enough, it did. I smashed the button on the scanner off and on several times as if I could teach the VCM to apply the TCC itself. I pulled over and put the scanner back into the monitor mode and there was still no lockup for no reason! What could I have been missing?
I shut the engine off and scanned for codes again. While waiting for the scanner to retrieve the codes, I looked at which codes we had written down before we started the work: P1870 and P0300. This P0300 now had my attention. As many of us know by now, a P0300 can indeed cancel the TCC apply. The scan still showed no codes. By the way, this scanner is a Tech2 running on GM software, so it is unlikely to miss a code.
I cranked it up and started back to the shop and noticed TCC engaged. I glanced at the scanner and, sure enough, the TCC Enable went to YES. But all the joy evaporated as I felt a slight engine misfire and the TCC Enable went back to NO. I drove it for about a mile or so and couldn’t get the TCC off to return to TCC on. I pulled over and turned the engine off and scanned for codes. Still no codes. I restarted the engine and took off and once again the TCC Enable went to YES and again I felt a little misfire and the TCC Enable went back to NO. So as I drove back to the shop, I performed the “clear codes” function even though the scanner showed “no codes present.” The TCC Enable went back to YES with the TCC coming on instantly. Now I was really confused. Why does TCC come back after clearing the codes, even when there are no codes present to clear?
I got back to the shop and made another tech get behind the wheel. I wasn’t sure if I needed another tech because I was all over the road or if I just wanted someone else to witness this bizarre event.We started the test drive by scanning for codes – again – and no codes were shown. At about 45mph the TCC Enable went to YES and the TCC slip went to 50 rpm or less, until we felt the engine misfire. At that point it seemed as if the VCM recognized the misfire and decided to turn the TCC system off to avoid more misfires. This was done without recording any codes, but the instant I cleared the “ghost codes” that weren’t there, the TCC Enable went to YES until it once again detected a misfire. I backed the scanner up in to the Misfire Graph Mode and looked to verify that what we were feeling was indeed a misfire. It was. But why wasn’t it recording any codes?
After several minutes of test-driving we determined that the software must have been written to turn the TCC off on the first few misfires without reporting and storing a code. If we continued to turn the key off and restart the engine and allowed it to go through the misfire cycle three times, it would report and store a P0300.
The fix was to replace a spark plug wire and eliminate the misfire. Once the misfire was gone, the TCC worked normally. We have seen this condition on several GM trucks from 1996-99.You can really chase your tail hunting the problem because once the engine detects the misfire and turns the TCC system off, the misfire goes away without the load the TCC puts on the engine.
Just keep my experience in mind the next time you have a GM vehicle with no lockup for no reason.
Dan Tucker is the owner of Tucker’s Transmission in Pine Bluff, Ark., and a member of the Sonnax TASC Force®.