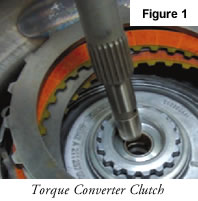 The 722.6 transmission went into production for use in 1996 model year vehicles and is still being offered in 2009. The 722.6 can be found in Mercedes, Porsche and Jaguar. The unit can also be found in variety of Chrysler products, where it is referred to as a NAG1.

The acronym NAG, is derived from the German word for new automatic gearbox; the number 1, being the first version. In the US, NAG1 units include the W5A580, W5A380, W5A330 and W5J400. In the W5A series, the last three digits indicate the maximum input torque in Newton meters. The W5A330 has the widest gear ratio; the others have the same ratio. The J400 identifies the unit as a Jeep application.

The Sprinter, Crossfire and Mercedes units require specific fluid due to calibration issues, while the other Chrysler applications use ATF4.

This article will focus primarily on drivability issues related to the electro-hydraulic control unit or valve body. This gearbox was one of the first 5 speeds with a new concept in load sensitive Working Pressure and Overlap Clutch Control. The converter was also unique because of its multi-disc torque converter clutch (Figure 1).

All these advances require precise hydraulic control, which leads us to the problems discussed here. One of the drivability complaints involves engine RPM flare on 2-3/4-5 upshift or a neutral flare on a 5-4/3-2 downshift. During upshift or downshift under load, line pressure (referred to as working pressure in the 722.6) must be responsive. The outer bore of the working pressure regulator valve wears and allows the pMod solenoid signal oil to leak past the boost end of the valve (Figure 2). As the casting wears, working pressure does not increase with engine load and the flare or loss of gear occurs. 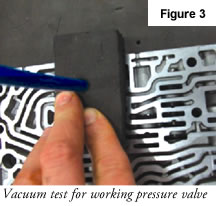 In 1998, many of the high mileage cars we repaired under Mercedes warranty had the same problem: 2-3 flare causing the vehicle to go into limp mode. After several inspections we discovered the link between the working pressure bore wear and the shift problems. We felt that the lack of hardness of the valve body material was the cause of this common failure. We designed a bushing to correct the leakage, using a harder material that would allow it to last longer when paired with a high speed valve. The valve is a long, one-piece design, and when it is leveraged on the larger end, it also loads into the bore on the smaller inboard end. Both of these wear conditions can be discovered by either a vacuum test (Figure 3) or a visual inspection. Figure 4 shows a worn bore on the right and a repaired bore on the left.

The 1-2 /4-5, the 2-3 and the 3-4 Overlap Sleeves are also in the pMod solenoid signal circuit (Figures 5, 6 and 7). It is common for them to wear on the I.D. and to leak at the O.D. as well. Wear at any of these sleeves reduces pressure at the working pressure valve. These sleeves can be vacuum tested prior to removal or cleaned and inspected for wear.