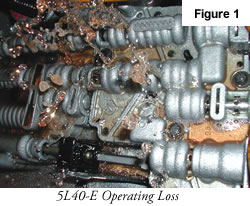 Figure 1 shows a 5L40-E valve body being tested on a valve body machine. The pressure used here is lower than normal operating pressures, but that made it possible to capture the many spurts and geysers erupting from the valve body. In reality under normal operation these spurts would be a pressurized spray. There are many exhaust points in modern valve bodies and even under the best of circumstances, this flying fluid traps and carries a fair amount of air with it on its way to the sump. This is to be expected; sumps and pickups are designed to deal with a certain amount of aeration.

As valves and bores begin to wear and allow leakage, the easiest path for the leak is to exhaust. Two things happen as a result of this wear-induced exhaust leak. First, the leak allows a pressure drop which is loss of control pressure. Valves or components no longer move, apply or respond as intended. Second, the amount of exhausted fluid and therefore the amount of air entering the sump is increased. The amount of aeration can easily surpass the sump's ability to dissipate the air before the pump picks it up. The minimal sump capacity of the 5L40-E makes it especially vulnerable to this problem.

The chart below identifies Reverse or TCC complaints associated with the two pronged ailment created by wear and leakage. The illustrations and notes follow the order of service, beginning with in-vehicle, on to disassembly, bench inspection and ending with the preparation for Dynamometer or vehicle testing.

With the oil pan removed and the manual valve in the reverse position, apply 30 to 40 psi of regulated air into the main line pressure tap. This is referred to as a captive wet air test or WAT. The tap is located between the pan rail and cooler lines. A good valve body will have minimal fluid loss at the three locations indicated (Figure 3).

Loss of Reverse at Low Pressure

It is common for the filter to eventually break as a result of contact with the valve. Filter fragments migrate to the reverse lock-out bore and cause the valve to stick towards the retainer (Figure 4).

Loss of Reverse at High Pressure

A used TCC solenoid can be modified for a test tool, or a fixture can be made to duplicate the OE manifold. To use a solenoid, remove the coil and both screens and then plug the port that had the wrapped screen. If you can make your own test manifold, make a through-hole that exits at the TCC valve and tap the outer end for a removable plug. This tool can be used in a functioning unit, so a removable end plug allows you to verify pressure buildup.

Using the test tool on a bench unit, apply low air pressure to the outer end. Air flow should only exit at the TCC regulator valve and into the TCC signal circuit.

During the air test, the TCC enable valves (located in the pump) and reverse lock-out should stroke and no leakage should be visible at the TCC regulator bore. If the reverse lock-out valve does not stroke, filter particles may be causing it to stick.

If you use the tool during a vehicle reverse pressure test, it can isolate valve body vs. pump issues. Install your test manifold, with the removable plug in the through hole. If reverse remains engaged at high pressure, the original TCC solenoid had a cross leak. If reverse is still lost, the unit has a cross leak and circuits can be air tested through the tool to identify the source.

The case circuits shown (see Figure 5) can be air tested to identify pump cross leakage. Both circuits are dead-ended at the valves. When they are pressurized at 50-70 psi, the valves should stroke, but no leakage should be seen from any other area. If it does leak, there is bore wear or pump warpage, which lead to TCC and clutch pressure problems.

Figure 6 identifies valves of concern that have been isolated in previous tests. Once the casting is cleaned, these areas can be vacuum tested or the bore can be inspected for wear. The valves themselves rarely have any witness marks. Bore wear can be detected, but it does require careful inspection. With a calibrated vacuum test station and proper valve to bore clearance, these circuits should retain at least 18" of vacuum.

If you have repetitive problems, or wish to verify TCC solenoid quality and control, tapping into the TCC circuit at the case bell (Figure 8) will be a productive test. Tapping into these circuits identifies the amount of pressure within the TCC apply and signal oil. These circuits can be drilled and accessed with the pump/bell removed. Accurate gauge or Transducer should be installed.

If you perform this, use the precautions of the construction trade, "measure twice and drill once." The casting material is minimal but sufficient to access the ports with a Parker# 169PL-4-10X32 fitting. If you have not utilized this nylon tubing test before, also purchase a 169PL-4-2 and sufficient nylon tubing.