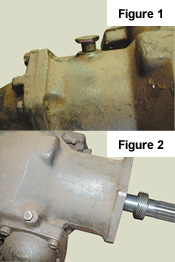 The cast iron (C.I.) Powerglide®transmission shares one distinction with the motor cars and motorcycles manufactured in the U.K: they all leak. Any transmission shop owner who is being honest with himself will admit this. Most are not surprised to see the owner of an early-model Chevrolet returning to their shop with a piece of cardboard adorned with a large red spot. Over time, many shops have come up with creative solutions for some of the particularly problematic leaks. The OEM cork seal located on the T.V. shaft, for instance, has been replaced by the O-ring that is normally found on the C6 modulator. This upgrade has been very successful. Another example is the use of the aluminum case, Powerglide manual shaft metal-clad seal in place of the C.I. Powerglide lathe cut seal. A third example is the C.I. Powerglide steel speedometer bullet: the OEM speedometer bullet does not have a positive seal, but it can be fitted with the metal clad seal used in the 350-steel speedo bullets with minimal machine work. This upgrade also has been very successful. 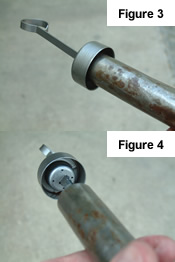 Even with all of the creative new sealing alternatives, it is difficult to build a C.I. Powerglide that is leak-free. The owner of a local transmission shop recently mentioned that he was considering no longer rebuilding C.I. Powerglides. His reason was that all four of the units rebuilt in the past year came back with leaks.

A root cause analysis was started to find the origin of the leaks. The first thing learned was that, although all C.I. Powerglides were grouped together, the majority of the reported leaks were in the 1949-1957 units. The 1958 and newer units had relatively few reported leaks. A closer look at the different years explained the difference. For the 1958 model year, Chevrolet added a vent to the rear of the main transmission case (Figure 1). Previous years did not have a vent (Figure 2).

Before 1958, the only vent for the transmission was the opening at the top of the fill tube. The dipstick did not have a positive seal, and was designed to allow air to enter and exit the transmission (Figures 3 & 4).

The Hydra-matic™ transmission of that day had a similar dipstick, but it entered the transmission at the top of the case and vented the entire main case and extension housing cavity equally. Since all of the cavities of the Hydro-matic were well vented, leaks were not an issue. By comparison, on the C.I Powerglide the dipstick tube enters the case at a lower level. This means that - when the fluid is at its proper level - this area is isolated from the rest of the main case cavity. When all of the area inside a transmission case is not vented equally, pockets of pressure are allowed to build up. The vented area of the main transmission case and the extension housing are connected by an orifice in the 11 O'clock position in the rear pump (Figure 5).

This orifice was restricted by a small pin. Veteran C.I. Powerglide rebuilders learned the hard way that leaving the pin out of the orifice in the rear pump would cause the transmission to burp oil out of the dipstick. Before the vent was added to the main case in 1958, this burping action was the only way that a pressure build up could be exhausted from the main case. This pressure build-up also explains the numerous stubborn leaks.

To retrofit a vent to the earlier transmissions, a 90° brass fitting was added to the extension housing. A length of fuel line hose with a plastic vent from a 350 transmission was attached to the fitting. The end of the hose with the vent was then attached near the top of the dipstick tube (Figure 6).

Unfortunately, this root cause analysis was started more than 50 years too late for this problem, but hopefully it will help with the way we approach future ones.

Get Ready to Race with the Upgraded Sonnax Powerglide Oil Pan