A 1993 Nissan Maxima was brought to a transmission shop. The customer complained about a persistent transmission leak that was leaving a spot on his garage floor and said the transmission had been rebuilt about a year earlier. He added that the vehicle was returned to the original shop within the first month to have the passenger side axle seal replaced. Since the axle seal replacement did not eliminate the leak, the vehicle was taken to a general repair shop, which replaced the axle seal and installed another axle under warranty. The customer said that each time the vehicle was worked on, the leak seemed to stop for about a month, then reappear.
The technician who was working on the vehicle confirmed that the passenger side axle seal and axle had been replaced recently, and that ATF was dripping from the seal. The technician checked for side-to-side movement of the axle where it contacts the seal. His opinion was that play was present but not excessive. He also reasoned that the play was about the same as on the driver’s side axle, which was not leaking. He pulled the axle out and removed the seal to inspect the differential carrier. The technician then exerted force on the carrier to make sure there was no play where the carrier was supported in the case. The carrier had no movement and the I.D. of the carrier, where the axle passes through, looked like new (see Figure 1).
Luckily, the pristine appearance of the I.D. of the carrier raised a red flag for the technician. He considered whether the shop that did the original overhaul had replaced the differential with the wrong one – or one with an I.D. that was bigger than the O.D. of the axle. A check of the differential proved that it was the correct one for the vehicle and that the I.D. was the correct dimension. When the axle was measured where it contacts the differential, it was .070” smaller than the I.D. of the carrier. This led the technician to consider a second scenario: whether the axle had been replaced with the wrong axle or at least with one that was smaller on the O.D. where it centered in the differential carrier. However, when the axle was checked out, it was the correct one for the vehicle and the O.D. dimension was correct for the axle.
That left the question of how the axle was being centered in the seal. The passenger side axle on this model transmission is a two-piece axle. The inner section of the stub shaft is supported by a pillow-block bearing that is mounted to the side of the engine. Unlike a one-piece axle, the stub shaft does not have a constant velocity (CV) joint at the transmission end. The side gear that the axle is splined into is the only thing that centers the axle. The clearance between the side gear and the carrier must have been more on on checking for play at the axle.than the seal could tolerate. But why didn’t the axle appear loose when the technician checked 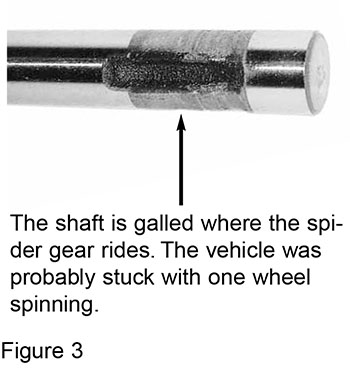 it? Therein lies a valuable lesson on checking for play at the axle.
In one position, the spider gears that rotate on the cross shaft in the differential will support the side gear that drives the axle. If you pry on the axle on a plane that is parallel to the cross shaft, the axle will always appear tight. If you pry on the axle in any other position, the wear will show. The technician put the axle back into the differential and pushed it side to side on a plane that was perpendicular to the cross shaft. It had about .070” play (much more than the seal will tolerate). When the differential was removed from the transmission and taken apart, the wear was obvious (see Figure 2). At one time, one of the front wheels had been spinning faster than the other. You could tell this because of the galling on the cross shaft (see Figure 3). The vehicle was probably either stuck or accelerated while on a lift.
Remember: Don’t be fooled by the pristine appearance of the differentials in RL4F02A/RE4F02A units and be sure to check them by prying on the side gears perpendicular to the cross shaft.
Ed Lee, Sonnax technical specialist, is a member of the TASC Force® (Technical Automotive Specialties Committee), a group of recognized industry technical specialists, transmission rebuilders and Sonnax Industries Inc. technicians.