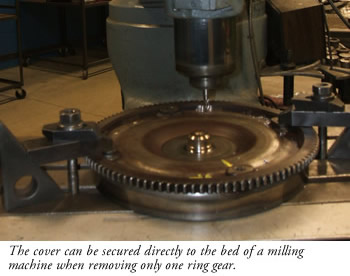 Torque converter rebuilders have been reporting an increase in the number of failed ring gears on Mitsubishi Galant converters. Most of the failed ring gears are found on 2006-2008 vehicles equipped with V6 engines, and the failures seem to occur soon after the vehicle's starter has been replaced.

Prior to the ring gear failures, most customers report hearing a noise during startup followed by a starter non-engagement condition. In most vehicles, the starter ring gear is located on the outer diameter of the flex plate; when a ring gear fails, the flex plate must be replaced. On most Mitsubishi Galants, the ring gear is mounted directly on the converter, which makes it more difficult and much more expensive to replace. If the mileage of the vehicle or the appearance of the ATF makes the condition of the transmission questionable, replacing the converter and overhauling the transmission may be a better option than simply replacing the converter. If it is a low-mileage vehicle and the ATF appears to be in good condition, it is possible to replace only the ring gear.

Why Did the OEM Ring Gear Fail?