With a basic understanding of TAPS, the Transmission Adaptive Pressure System covered in last month’s Tech Tip, we will now attempt to tap into the Steady State Adapt System and what its data can tell us. I want to mention that not all scanners provide Steady State Data, but I’m convinced this information is a real help in diagnosing problems in the later GM units. Data for the examples I used in these articles was either recorded on my GM Tech2 or my Mastertech. All the units in the examples shown below are 4T65-Es.

The Steady State Adapts represent something far different than the 1-2, 2-3 and 3-4 shift adapt TAPS that we covered in last month’s article. As we noted, the Shift Adapt TAPS are pressure adjustments made by the computer DURING the transition from one gear ratio to another. Notice in Figure 1 the eight different Steady State psi lines of data. Each line represents the time after the ratio changes are made. To make it easier, remember that the Steady State TAPS are there to keep the ratio steady. If the computer sees the slightest ratio calculation error in 1st gear – or maybe I should say if the computer sees the slightest slip in 1st gear – the computer instantly raises line psi in an attempt to stop the slippage by increasing the Steady State TAP 1GR Adaptive Pressure.

If for some reason the PCM calculates a ratio problem (slip) after the transition from one gear to another is made, the PCM will increase the Steady State Adapt psi to try to stop the slip. In Figure 2 you will see the 3rdGR TAP at 59.99 psi.

This is an indication that there is slippage while in 3rd gear. The only problem is, I never felt it slip while driving this vehicle! The PCM had seen the slippage, increased the line pressure and corrected the slip. If I had not monitored the Steady State Adapts I would never have known I had a slip in 3rd. The customer’s complaint was a harsh 3-4 shift. This was caused by the PCM raising the line psi in 3rd and making the 3-4 with the line psi going into the shift at 59.00 psi above normal. Remember the Shift Adapt TAPS has the ability to make small psi adjustments during the transition of the shift (1-2, 2-3 and 3-4), and because this transaxle was slipping in 3rd after the 2-3 shift, the PCM corrected the slip with the Steady State TAP increasing line psi above what it should be. But, there’s no way the 3-4 TAP can correct it that fast, and the result is a harsh 3-4. Now, this is completely different from what we are used to seeing when it comes to troubleshooting a harsh shift. The fix for the harsh 3-4 shift was to replace the 3rd clutch piston as the rubber was blown off of the piston. 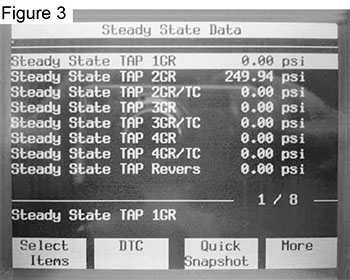 In Figure 3 we have a readout of very high Steady State Adapt 2nd gear psi. Notice the psi is at 249.94 psi. The customer’s complaint was no 2nd. The vehicle shifted from 1st, then remained in 1st when 2nd was commanded by the PCM, with 3rd and 4th being OK. The Steady State Adapts revealed a slip in 2nd. Because I had no elevated Steady State Adapts in 3rd, I had helpful information for troubleshooting this problem.

So, here I had the PCM sending extra psi to the 2nd clutch to try to correct the ratio problem in 2nd, but the transaxle remained in 1st. It could have been a hydraulic leak, but because the 2nd clutch was on in 3rd and 4th, this pointed to the 2nd clutch plates not holding. Upon teardown of the unit we found the needle bearing between the 2nd clutch drum and input drum had failed and the loose needles chewed the lining off of the 2nd frictions. So in this case, it was a mechanical failure.

… think twice before you go for a test drive! With readings like this, chances are this vehicle has a restricted filter and you might find yourself walking back to the shop, like I did.

With the transmission industry changing so fast, sometimes it’s easy to overlook small changes. Sometimes these smaller changes turn out to have a big effect on a transmission’s operation. Understanding how some of this often overlooked and unused scanner data works could lead you to a much easier diagnosis the next time you troubleshoot a unit with the GM Adapts systems. The troubleshooting rules have changed. But so has the technology we have to diagnose the complex vehicles. With all this new information, I feel that even the more complex transmissions are becoming easier to troubleshoot.