A 2001 Buick Century Custom was brought to a transmission shop with a complaint of jerky shifts. A road test of the vehicle showed all shifts were harsh, and a scan check registered the generic gear ratio error code P0730. Since Code P0730 does not illuminate the malfunction indicator light, the harsh shift was the customer’s only clue that anything was wrong.

For a Code P0730 to set, the PCM must detect an incorrect gear ratio caused by excessive slip within the transaxle: to be exact, a gear ratio that is off by more than 5% for more than seven seconds. 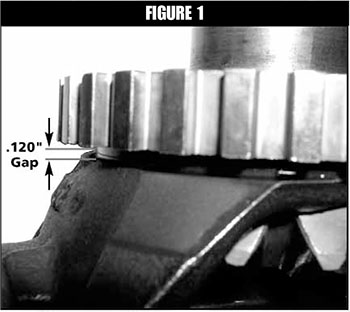 Since all of the ratios were off by 10%, the technician reasoned that the code was most probably not set by component slippage. He also figured that since the slippage seemed to be consistent, the problem was probably something related to data supplied by either the input speed sensor (ISS) or the vehicle speed sensor (VSS).

The ISS signal compared favorably to the engine rpm, so that was ruled out. The PCM compares the known axle ratio to a calculated ratio for each gear range, so the PCM was checked to verify that it was correct for the vehicle (correct known axle ratio). The PCM was proved to be correct so the technician zeroed in on the final drive and the final drive’s reluctor. The vehicle was put on the lift and the differential was removed. The final drive turned out to be the correct ratio for the vehicle and the reluctor had the correct tooth count. 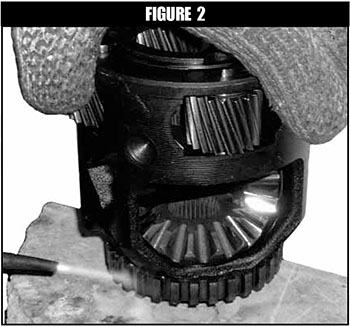 The light at the end of the tunnel seemed to be fading fast at this point, and then the technician noticed a clue. The reluctor is supposed to be butted flush to the differential. On this differential, the reluctor had a .120-inch gap between it and the differential (see Figure 1).

If you have had a P0730 code in the past that you ended up replacing a unit to correct, you may want to revisit that unit. Pull the differential and do the torch test. If it falls off immediately, you will only have to replace the reluctor to have a good stock unit.