Subarus Have Their Own Set of Problems

The 4-speed automatic Subaru is a first cousin to the [RE4R01A], RE4R03A and [JR403], but the Subaru version of this transmission has not been plagued by the converter clutch problems that have afflicted other members of its family. The Subaru was the only one to offer an all-wheel-drive option – which has allowed it to have its own set of problems.
Most problems have been related to driveability, and usually can be traced back to the all-wheel-drive section. Customer complaints run the gamut: slipping, slipping on take-off, stumbling, shuddering and shaking. This wide range of often misleading symptoms has led to some misdiagnoses. All of these complaints usually boil down to the fact that the vehicle is in full-time 4-wheel-drive when it’s supposed to be in 2-wheel-drive range. 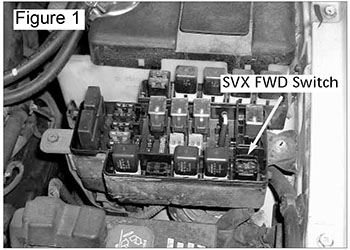 Diagnosing this problem is not difficult. The first thing you need to do is locate the front-wheel-drive switch, which is not really a switch. It’s a fuse holder.When a fuse is installed into the fuse holder, it provides power to the pressure control solenoid, which controls the transfer clutch. Since the solenoid is normally open, sending voltage to the solenoid causes it to close, turning the transfer clutch off and putting the vehicle into 2-wheel-drive.
The 1996 ATSG blue seminar book has three illustrations that show you how to locate the FWD switch on the Legacy, Impreza, Loyale and XT Coupe models. All of these switches are located under the hood: the SVX switch is also under the hood but is located in the fuse box (see Figure 1).
If the vehicle performs satisfactorily when the fuse is installed, then the problem is not in the transmission. In this case, follow the troubleshooting tree to eliminate the input components or computer as the culprit. If the symptoms remain the same when the fuse is installed, the problem is in the transfer assembly of the transmission.
Subaru dealerships encounter this problem routinely, and their solution is to replace the entire transfer assembly, including the clutches, drum, piston, hub, valve body block and solenoid. Although this method is effective, it’s overkill – and expensive. Because of the cost of the components, you may want to spend a few extra minutes to properly diagnose the problem before digging into the transmission and presenting your customer with a hefty bill.
First, put the vehicle on an incline with the back end facing downhill, the transmission in neutral and the engine running, and let the vehicle drift backward while turning left or right. If the all-wheel-drive is engaged when it’s

supposed to be in 2-wheel-drive mode, it will feel like the brakes are coming on. What’s really happening is a bind-up between the front and rear wheels on a turn because the turning radiuses are different. This will only happen when both the front and rear wheels are in motion.
Now, repeat the procedure with the engine turned off. If the vehicle performs satisfactorily at this point, then the clutch is being hydraulically applied. This test tells us that the clutch is capable of applying and releasing properly and, even though there may be hub wear, it is not severe enough to hold the clutch on.
So, with those causes eliminated, your problem has to be the apply valve or the solenoid. Either the apply valve is stuck in the apply position or the solenoid is stuck open or failing to exhaust enough oil.
The Subaru solenoid tends to fail in the same way as the TCC solenoids in the TH125C and 2004R. Remember, the TCC solenoids in those applications are sensitive to temperature. They tend to work just fine until the temperature increases and thins the viscosity of the oil to the point where the orifice is supplying more oil to the solenoid than it is capable of exhausting.
Those TCC solenoids tend to pass the bench test – whether they are in good shape or defective. The Subaru solenoid behaves the same way, making it difficult to diagnose the problem by bench testing alone.
In most instances the Subaru solenoid works fine for a few minutes – until the oil warms up. (This is also a clue. If the problem was a stuck apply valve, it wouldn’t work well when cold.)
Subaru does not sell the solenoid separately: It can only be purchased with the auxiliary valve body. An aftermarket solenoid is a better buy, provided you have diagnosed your problem correctly.

Ed Lee is a Sonnax Technical Specialist who writes on issues of interest to torque converter rebuilders. Sonnax supports the Torque Converter Rebuilders Association. Learn more about the group at www.tcraonline.com.