Troubleshooting Converters Has Twists and Turns

Modern-day lockup torque converters were introduced in the late ’70s by the Chrysler Corp. There had been earlier attempts – the three-band Borg Warners used in Packards come to mind – but the Chrysler version was the one that had staying power. The lockup torque converter was developed to answer the demand for better fuel economy – and it was an immediate success. But along with better fuel economy came new challenges for the technicians of the day. They had no idea how easy their lives had been, but the lockup torque converter was about to change their lives forever – and not necessarily for the better.
Shudder on TCC apply and engine stalling on engagement were two of the customer complaints that the early technicians
(then known as mechanics) had to address. On the mechanical side, there were any number of potential culprits that could
cause a shudder problem. Cross leaks between the pump body and stator support caused by unparallel surfaces were often the cause. Some other mechanical problems were as simple as converter bolts that were too long or foreign material (dirt, grease, silicon) in the mounting bolt holes of the converter. Either of these conditions would create a dimple on the converter inner surface where the clutch had to seat.
Hydraulics also played a role. Using the wrong fluid was a No. 1 problem because the new 7176 fluid had friction additives
that were not present in the more common Dextron fluid. Technicians now had to become aware of how the fluid entered and exited the converter. 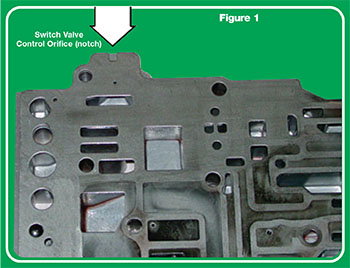 Converter charge oil came down the input shaft to fill the converter. Since this oil entered the converter in front of the lockup clutch, it was also responsible for keeping the clutch off the converter for TCC release. When the switch valve stroked to the lockup position, the oil in front of the clutch exited through the same passage that was used to fill the converter.
Since lockup apply oil is line pressure and it is only controlled by the pressure regulator valve, lockup apply feel is controlled by an orifice at the switch valve. The oil in front of the lockup plate must pass through this orifice when it exits the converter. If this orifice is too small, the oil will not exit quickly enough and you will have a lockup shudder. (The orifice is located above the end of the switch valve. It is a notch in the valve body spacer plate that is sandwiched between the two halves of the valve body (see Figure 1).
Technicians were being told by some smart technical support people that increasing the size of this orifice would allow the
clutch to apply faster, because the release oil would exit faster. The faster release did eliminate a lot of shudder concerns and this practice is still in use today, more than two decades later.
On the other side of the circuit we were learning that the flow through the lines and cooler could also affect lockup. If the
engine of a vehicle would start up and run OK when the selector was in the park or neutral range, but would stall immediately when the selector was moved to drive or reverse, most likely the cooler was plugged. This is when technicians started hearing that a cooler should pass a minimum of 1 quart of fluid in 20 seconds.
Many technicians started keeping a short length of fuel line hose hanging from the handle on the side of their toolbox to
check for this condition. They would disconnect both cooler lines from the radiator and use the fuel hose to temporarily join the lines. By looping the two cooler lines, the cooler was eliminated from the circuit. If the engine no longer stalled when the transmission was put into gear, then the technician knew that the cooler was either highly restricted or plugged completely. Along these same lines, if a vehicle with a shudder problem drove satisfactorily with the cooler bypassed, the technician knew that the vehicle had a restricted cooler. 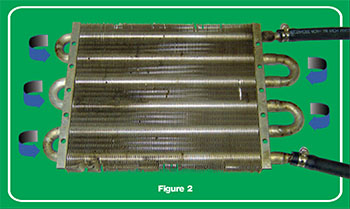 Many of the early restricted and plugged coolers were selfinflicted injuries. Torque converter rebuilders learned the hard way that they could not leave any radius at all where the clutch surface of the cover met the side of the converter. Since all of the original Chrysler friction material was floater clutches (not bonded to clutch or cover), if the friction material contacted
the radius when the clutch applied, then the radius would nibble away at the edge of the material. Of course, this nibbled away portion would find its way into the cooler.
The question of whether the chicken or egg came first was nothing compared to the debates that transmission technicians
and converter rebuilders had over whether their plugged cooler caused the converter to fail, or whether the failed converter plugged the cooler. Similar plugged cooler problems and subsequent debates were later heard when converter rebuilders were in the learning curve of bonding their own clutches.
Technicians need to make sure that they are not creating their own restrictions. For example, take a look at tube-type coolers. If you’ve ever attended a plumbing class, you may remember that every bend in a water pipe creates a certain amount of back pressure.
One of the basics taught in a heating and air conditioning class is that a 90-degree bend has the same restriction as 25 feet of straight pipe. When you consider that most tube-type coolers have 180-degree bends (2 x 90) at the end of each run (see Figure 2) and there are usually five of these bends in each cooler, that is a restriction equal to 250 feet of cooler line! Oops!
With transmission technicians and converter rebuilders working together and sharing knowledge, we may be able to get closer to that easier life of yesteryear.

Ed Lee is a Sonnax Technical Specialist who writes on issues of interest to torque converter rebuilders. Sonnax supports the Torque Converter Rebuilders Association. Learn more about the group at www.tcraonline.com.