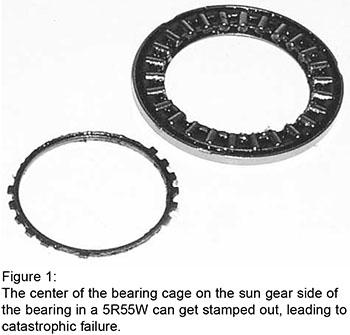 The 5R55W transmission was used in Ford Explorers and Mercury Mountaineers from 2002 through 2004. This unit was very similar to the other 5R55 series transmissions, but each model has a few unique differences. One of the differences in the W model transmission is the front planet and sun gear. The ratio of the W transmission is close to those of the early N model, but the components are different. The front planet bearing in the W model was especially prone to failure, which may explain why this unit was phased out. The planet and sun gear were not carried through when the unit was replaced by the 5R55S in 2005.

The problem with the 5R55W was that the center of the bearing cage on the sun gear side of the bearing would get stamped out, and this would eventually lead to catastrophic failure. In this event, replacement is the only option, and the replacement part is available from Ford (p/n 2L2Z-7A398-AA) for a couple hundred dollars. The original bearing is not available separately from the dealer and even if it were, it could not be replaced without disassembling the planet.

If you’re lucky enough to catch the problem with the planet before catastrophic failure has occurred, there may be an option other than replacing the planet. 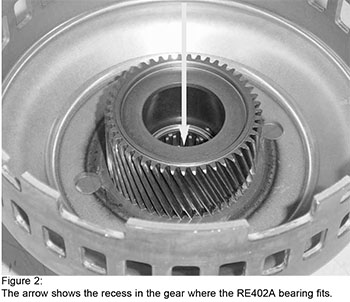 The original bearing was centered by the planet side bearing race and the clearance fit cavity in the sun gear that mated to the opposite race. Provided that the planet side race is serviceable, you may substitute another bearing in the original planet. In this case, the bearing that rests between the stator support and the direct drum in the RE4F02A transmissions is a good choice.

The O.D. of this bearing provides a good fit in the sun gear, and the I.D. has sufficient clearance. The replacement bearing is .020” thinner than the original bearing, but this is not a problem. The aftermarket replacement shim for adjusting the front endplay on 700 -R4 and 4L60-E transmissions is made to order for this job. The shims are available in thicknesses of .010” (Sonnax p/n 77406-10) and .015” (Sonnax p/n 77409-15). Place the appropriate shim between the sun gear and the bearing, and you’re back in business.

Special thanks to the crew at Deltrans, Inc. for sharing this fix, and to Hardparts for Transmissions for their assistance in writing this article.