Figuring Out the 5R55 Alphabet

The following material focuses on the inspection and diagnostics of 5R55W/S transmissions. Although the 5R55N is similar, only a few parts are interchangeable and most others can create problems if installed in a W/S unit. The N unit was used from '99-'02 in Jaguar S with 3.0/4.0 liter, Lincoln LS and Thunderbird 3.0/3.9 liter. The N was replaced by the S in 2003 in the Lincolns and T-Birds. The W showed up in Explorers and Mountaineers for '02-'03 before giving way to the S in '04-'05 models. 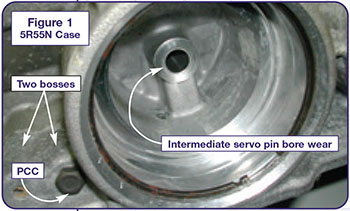 An external visual inspection will reveal the N has two cast bosses, just behind the intermediate servo cover, closest tapped for PCC. The W/S has only one boss for the PCC pressure port (see Figure 1). If the unit is in the vehicle, you cannot see this but you can feel the difference. With the oil pan removed, the N will have a base plate similar to the 4R70W covering the lower valve body along with a reverse pressure (RP) switch. The 5R55W/S solenoid will not have terminals for the RP switch and the circuits are different. This article will address the W (24-tooth OD sun gear) and the S (38-tooth OD sun gear) even though hard parts vary. 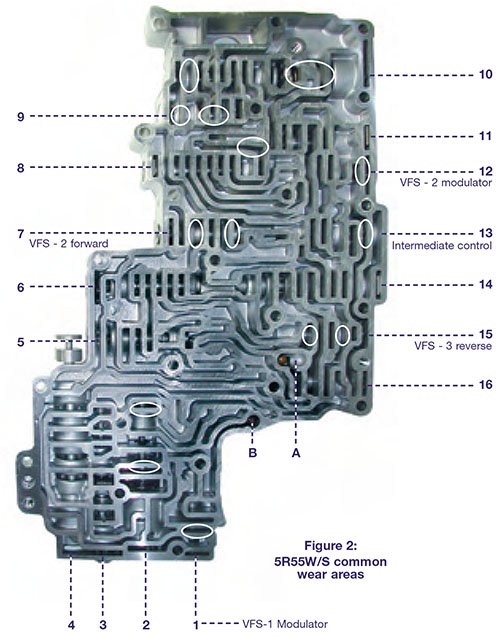 The point of excess valve-to-bore clearance can be very subtle. For a quick visual indication on the condition of a 5R55W/S valve body, I suggest you start with the TCC modulator bore 9 (see Figure 2), followed by the main regulator bore 2 (see Figure 3). These tend to wear first, due to their activity.
As the cycle rate (higher in city traffic) progresses, the VFS 1, 2, 3 modulator bores wear, reducing clutch and servo pressure. With adaptive strategy, the PCM can compensate, but after excess wear, gear ratio codes or slippage occur. Often the solenoid or the servo pin bore is blamed as the culprit, but actually the VFS modulator valves cannot supply enough pressure.
Solenoid Manifold
The solenoid assembly appears to interchange between the N/W/S, but the critical components are the base plate and the filter (see Figure 4). If the base plate or filter are mixed, the unit will lose reverse, TCC apply and solenoid oil pressure. The W/S components are pictured in Figure 4.
The filter, which is part of the gasket, lives under the aluminum base plate and is a serviced item. If you plan on reusing it, keep it far away from solvents or the silicone bead will never be the same size. If you replace it, compare the old and new filters.
The solenoid is often accused of creating a loss of reverse, flare 1-2 or 2-3, or delayed forward. Even though replacing the solenoid appears to eliminate the problem, the cause can be overlooked. Two root-cause issues follow: fluid that degraded the solenoid, and a loss of prime.
The fluid problem in the 5R55E, W, S and N units was caused by a factory ATF fill using an early Mercon V, prior to May 2005. Ford released an interim additive package (4L2Z-19B546-AB, fluid XL-11 with bulletin FSA 04B22) to install into customer and 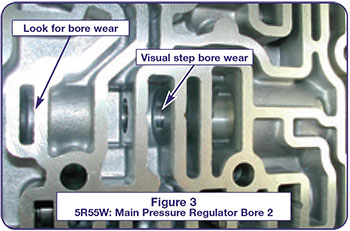 new vehicle inventory. The final resolution was to use a revised Mercon V (XT-5-QM) in a black quart container. If a service is performed and any trace amounts of questionable fluid are not removed, the service life of the next solenoid could be reduced.
A malfunction in a replacement solenoid can be traced to a loss of prime in the VFS solenoids. These are tested and shipped with fluid, but after handling, this lubricant drains off. Before installation of the assembly, fill the circuits with the new Mercon V or the XL-11 additive and pull the fluid through the solenoid with vacuum. If the solenoid does not function properly, run the vehicle until hot, allow a cooldown and road test later.
You should also note that Ford units manufactured after 2002 have adaptive strategy, and a relearn should be performed along with a solenoid service. Don’t forget to inspect the grounds at the battery, the PCM, and clean the mass airflow sensor.
TCC Slippage and Converter Failure
A common problem with the 5R55W/S is excessive TCC slip, converter failure or noise. It’s important to understand that converter release oil holds the TCC piston off the cover, supplying charge pressure, then flows to the cooler. This release oil comes from the converter regulator valve, and is limited to 130 psi.
As the command to apply TCC occurs, fluid from the solenoid flows to the modulator sleeve (see Figure 5) and the end of the TCC control valve.
This solenoid pressure is supposed to be limited to 72 psi by the solenoid regulator valve (see Figure 6). If altered or the solenoid regulator bore is worn (inboard end), the pressure continues to rise at the modulator valve sleeve. Higher pressure reduces the slippage, but can cause TCC piston deflection and converter failure.
How can the TCC piston deflect at 72 psi? Once the TCC control valve strokes, modulated line pressure is now the converter apply pressure. Release oil has been redirected to the cooler circuit. Whatever line pressure is available (160-250 psi plus) can be modulated via the TCC solenoid and sleeve to control slip RPM.
If you work through this a few times, you can see how valve body wear and modifications affect the TCC clutch and converter. Another small but important detail in this design is the back pressure valve (see Figure 7). It maintains 8 - 12 psi on the release oil to assist/allow in controlling TCC slip and lube pressure. 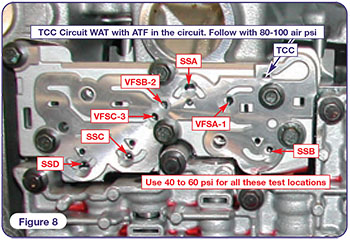 The Wet Air Test is an effective method for identifying the condition of the 5R55N, W and S valve bodies. This test can be performed in the vehicle or with the transmission on the bench. When the valve body is in good condition, the valves will stroke and there will not be excessive leakage past the valves or bubbling from the exhaust slots. It should be noted that excessive bore wear, visualized as leakage around the valve or slot, can aerate the fluid during operation. This aerated fluid (suspended bubbles) will create an excessive fluid level that then vents from the case or causes erratic pressure.
Remove the solenoid base plate and reattach it over the separator plate. ATF, along with low air pressure of 40-60 psi, can be injected into the circuits (see Figure 8).
Converter Feed, Thermal Element and Cooler Flow Testing
Fluid exiting the converter passes over a thermal element, which starts to open when converter temperature reaches 125º Fahrenheit. Prior to reaching the full open/inward position, the fluid is circulated within the unit for lube and there is no external cooler flow In fact if there is any, it’s coming out of the top/return to case fitting. Under normal conditions, the opening requires considerable run time, during which it will not snap like a shift valve. When it does open, the converter charge purges, reducing internal pressure, leaving a void to be filled with cool fluid. The cooler fluid retracts the thermal and the process can start over, causing erratic fluid level and in some situations, converter overheat.
Once the unit is up to operating temperature, you can monitor the converter command and valve stroke by the spike in cooler flow. If the TCC modulator bore, TCC control valve bore or the solenoid/gasket leaks, the change in flow is very subtle.
If flow is always low when not in lockup and reduces significantly in reverse, the pump line control valve may be sticking open, the pump may be misaligned or the gear pocket worn.
Isolate Pump Noise with Delayed Engagements
The line control valve located in the pump has been known to create a hydraulic resonance or to stick open. A plunger stuck open exposes the output to pump inlet/suction, resulting in delayed engagements. Once the RPMs come up, the pump volume may exceed the leak and engagement comes back. A plunger that will not open will reduce fuel economy, increase pump body wear and could elevate line pressure in reverse. 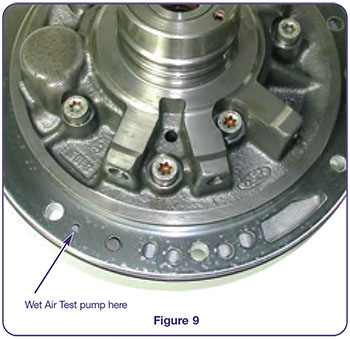 If the transmission is in the vehicle and suspected of a line control stuck open, place the selector into reverse and disconnect the wiring to the solenoids. This results in maximum line pressure and in many instances will hydraulically force the plunger shut.
Do not sustain high RPMs or a long test as the servos and seals sustain excessive pressure.
If the pump has been removed, supply 100 psi of air into the port shown in Figure 9. If you hear a “pop” noise, the plunger is stuck open. During the air test, no leakage should be escaping from other circuits. If it does, the canister/housing is loose in the bore, which will reduce pump output and line pressure. If the line canister is on the bench, side load the plunger as you push it down. No catch or edge should be felt.
Isolate Converter Noise
The 5R55N/W/S units have a TCC piston that floats through the cover. In Figure 10 you can see the load springs and the mating tooth patterns. Frequently and even with new converters, excess interference and lack of spring load results in a rattle, 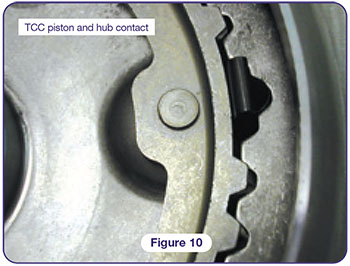 prevalent in neutral. This rattle is very difficult to isolate and can be related to the flex plate, the inspection cover, the camshaft sensor, the line control valve (review above) or the converter piston.
These units require a flex plate alignment tool and during that process the OEM paint/balance marks should be positioned next to each other. Most converter rebuilders can supply the tool and rebuild your converter with an updated piston (Sonnax p/n FD-DA-17PB), to eliminate a TCC rattle.
To isolate the noise prior to removal, use the line control valve test and alternate that test with a TCC command test. This TCC command can be performed with a shift box or by grounding the TCC solenoid pin 14. Verify you’re on the correct wire or you have just added time to your repairs!