Maybe you remember Pete and Repeat, or similar puzzles that appeared in magazines, newspapers or scholastic readers when you were younger. Regardless of the name, the idea was pretty much the same. There were two illustrations side by side that appeared 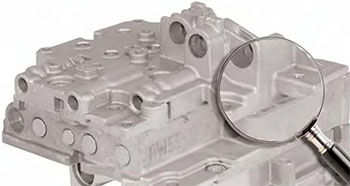 identical at first but on closer examination, you could spot small differences. That was the challenge: Could you find the 10 things that were changed from the first drawing to the second?

A whole new generation of kids could entertain themselves by comparing the configurations of valve bodies found in the AW 55-50/51SN or AF23/33 family of transmissions. The valve bodies found in GM, Volvo, Saturn, Nissan, Saab, Opel or Renault easily pass the first-glance test. Sure, they look the same. They will even bolt up.

Bolting up a substitute would be the only thing that would go easily for you that day. The body itself is a four-part stack, rather compact overall but multi-layered. There are many variations, and upon closer examination it is amazing to discover just how different they are. On the surface, casting numbers, cast codes, plate numbers or the presence or absence of vents are the first signs of differences. Then of course, there are the solenoids. Six different shift solenoids have been used and most of them can be substituted incorrectly. Some solenoids for a given function and location on the casting could have originally been either normally open or normally closed. Three linear solenoids are also found on the valve body, but each is calibrated according to the valve it controls. Even the solenoid mount bracket comes in three configurations.

The point is, if you must start looking to replace a valve body or a component, extreme caution is in order. Carefully match the details and question any apparent discrepancy.

The good news is, as in most modern valve bodies, there are areas where wear is commonly found and relatively easy to identify. The even better news is that we have not only identified some of these areas, but we have already made you the parts you need to address them.

In the pages to follow we show you some views of the four different valve body sections, along with the internal components.

We suggest examination of known areas of concern. Some examination requires nothing more than visual inspection. There are several valve and sleeve combinations pointed out. Wear here is frequently noticeable in the sleeve bore. Several end plugs are known leakers and should be pulled and inspected. Suspect not only one that is obviously loose but one that shows score or abrasion marks on the plug spool or in the bore. Larger valves may also show wear on the spools but careful inspection of their bore is even more likely to turn up the wear shadowing that tells you leakage is likely occurring.

In addition to visual inspection, many circuits can be Wet Air Tested. A vacuum test can also be used in many of the locations pointed out. Vacuum testing is quick and easy and can be one of the most accurate testing methods available to the average shop, if done correctly.

In the pictures that follow, visual inspection of the bores can be made in the areas shown as ovals or circles. Vacuum or Wet Air tests are performed at the arrows.