Sometimes gathering all the information about a problem is like fitting together the pieces of a puzzle. Finding out about differences in Ford 4.0L converter pilots was like putting a piece of a puzzle in place and seeing the whole picture a bit more clearly.

Keeping the torque converter running on-center and in-line with the transmission is critical in preventing front seal leaks and broken flywheels. These failures always seem to happen at the worst times and places, ensuring the most in customer inconvenience and a hard-to-handle repair cost.

On 4.0L Fords, critical details that contribute to front area leaks are the front seal-type, bell housing bushing alignment, engine-to-transmission alignment and converter hub run-out. In addition to these, the crankshaft spacer, torque converter pilot and flywheel/flexplate need special attention. Ford has made updates to the flywheel and torque converter pilot, and if you’re not careful, it’s easy to unintentionally install earlier versions of these parts.

Figure 1 shows the crankshaft spacer. This part lives between the engine crankshaft and the flexplate. It is very common to find this part cracked, broken or worn where the torque converter pilot fits into the center of the spacer. When the spacer is worn or broken, the converter can move out of alignment. It doesn’t help that the spacer is made of a brittle powdered-metal material that wears and cracks easily. It should be routine to inspect or replace this part on every vehicle.

Ford also changed the pilot on the torque converter. Figures 3 & 4 show the early and late converter pilots. The newer pilot is longer and has a smaller chamfer on the end.

Figures 5 & 6 show the short and long pilots assembled with crankshaft, spacer and flexplate. The longer pilot has .100 inches more contact area in the spacer than the earlier short version. Unfortunately, not all converter rebuilders update to the longer 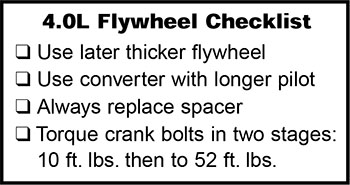 pilot, so it is common for transmission shops to replace long pilot converters with the earlier short pilot version, unknowingly taking a step backward. Whenever possible, your replacement torque converter should have the longer pilot.

Hopefully, this piece of the puzzle, taken together with the front seal-type bell housing bushing alignment, engine-to-transmission alignment and converter hub run-out, will make the whole picture easier to see and prevent costly comebacks with this troublesome area of A4LD/4R44E units.