1. Compared to other common transmissions, what is different about the RFE pressure control system?

RFE units have a full range pressure transducer and real-time adaptive closed-loop pressure control system. This system is unique to the Chrysler RFE transmissions. Because of this, it is not possible to raise pressure in an RFE the same way you would in other transmissions. Installing a stronger pressure regulator spring or larger boost valve will not be effective because the RFE control module will simply adapt and return pressure to OE specification. An electrical booster option is necessary to raise pressure on an RFE.

The previous Sonnax RFE Line Boosters had two versions, 44957-LB1 (diesel) and 44957-LB2 (gas). In diesel applications the Pressure Control Solenoid (PCS) duty cycle is closer to the 5% operational low-limit and pressure is generally higher than gas applications. As a consequence the 44957-LB1 (diesel) increased pressure less than the 44957-LB2 (gas). In rare instances a low pressure trouble code P0868 could set due to higher adapted pressures, or higher than typical system voltage. Higher system voltage increases current (amperage) to the PCS solenoid, causing a further reduction in PCS duty cycle as the system tries to adjust pressure. The P0868 low pressure code sets when PCS duty cycle tries to exceed the 5% operational low-limit. The RFE-LB1 is an improved design with an integrated chip (IC) circuit and a stronger pressure regulator spring. The improved design has three benefits over the 44957-LB1 and 44957-LB2:
a. A progressive pressure increase (approximately 10 psi) at lower pressure ranges and a greater increase (approximately 25 psi) at higher pressure ranges.
b. Greater sensor voltage range compared to old design reduces potential for trouble codes.
c. One kit can be used in both gas and diesel applications.

3. What results can be expected when the RFE-LB1 is installed?

Like the old 44957-LB1 and 44957-LB2, this Sonnax RFE-LB1 can be installed with just the harness, without installing the included stronger pressure regulator spring. With this scenario, pressure will increase as described. To achieve the pressure increase, the computer lowers the PCS duty cycle operational range. In rare cases, vehicles with higher system voltages or high commanded pressures may set trouble codes as the PCS duty cycle reaches the limit of its operational range. In the rare instance this occurs, the only option is to either remove the Line Booster harness or install the pressure regulator spring. If the Line Booster kit is being installed when the transmission is removed from the vehicle, simply install the stronger pressure regulator spring in the pump, and the harness when the transmission is reinstalled. With this scenario, pressure will be increased as described, however because of the new spring load, the system will make the higher pressure while the PCS duty cycle operating range remains close to original (reference chart below).

The Prescription for Optimum Pressure 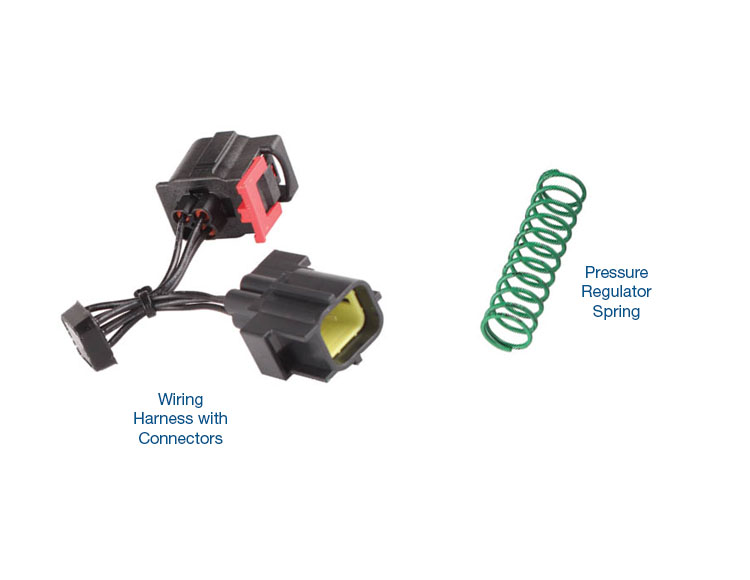