What IS the Correct Name? Part 1 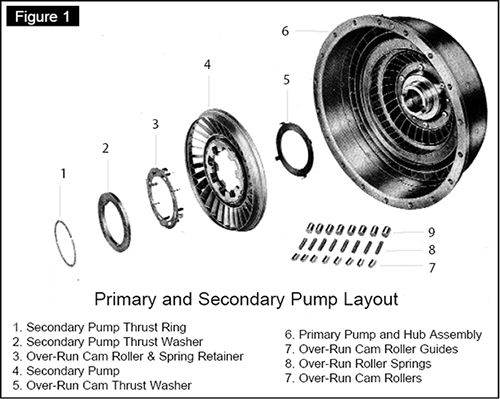 When you are ordering torque converter parts from your supplier, it is important to be able to communicate your wants and needs to your salesperson. Frustrations run high on both sides when the purchaser asks for and receives a clutch, when his intention was to purchase a friction ring. The frustration level increases when the purchaser realizes that he/she has purchased a $30.00 part when his/her intention was to purchase a $3.00 part. Ordering large quantities of the wrong part is even worse. If the purchaser and parts supplier refer to a given part by the same name, there is no problem. Unfortunately, you can visit most converter shops and hear three or four people use different names for the same part. For this reason, some purchasers will only order parts by the part number. These communication problems are not limited to purchasers and parts suppliers; they exist between shops and even between individuals within the same shop.
So, how do we learn to speak the same language? How do we know what name to call a part? Looking back to the origin of the automatic transmission may help us understand where the confusion began. Many of the names used for the parts of the torque converter today, were derived from its predecessor.
The earliest automatic transmissions did not use a torque converter to transmit engine torque to the input shaft of the transmission. Instead, they used a fluid coupling. The fluid coupling looked something like a torque converter, but lacked a stator. Some manufacturers called the fluid coupling a torus assembly. The torus assembly consisted of a drive and driven torus, a flywheel, and a torus cover. The flywheel was attached to the engine’s crankshaft, and the empty shell or cover (no blades or vanes) was attached to the flywheel. This shell drove the drive torus. As the assembly rotated, oil was forced to the outer diameter of the drive torus and into the driven torus. The driven torus was attached to the input shaft of the transmission and transferred some portion of the engine’s torque to the transmission. The fluid coupling never attained high efficiency because the oil that exited the driven torus struck the drive torus in the opposite direction of its rotation, which effectively worked against the engine. To correct this deficiency, a stator was placed between the drive and driven members of the fluid coupling. The stator redirected the oil that was exiting the driven member so that it now struck the drive member in the direction of its rotation, working to assist the engine. The addition of the stator to the fluid coupling began the evolution from fluid coupling to the torque converter.
During this evolution, several other changes occurred. The blades from the drive torus were moved to the inside of the empty shell that was attached to the flywheel, and this part became the new driving member. The original equipment manufacturers (O.E.M.) of the day could not agree on what to call this part. General Motors started out calling this part the primary pump (Figure 1). Today it is just called the pump assembly.
Chrysler called this part the impeller and that name is still used today. Ford called this part the impeller (pump) (Figure 2) and calls it the impeller assembly today. The overseas manufacture of the day, Toyota, called this part the pump impeller (Figure 3).
The terms used for the torque converter’s driven member known as the turbine hub. When the hub was coupled to the turbine, it was called the turbine assembly. The term turbine assembly was used by all of the early O.E.M. except Toyota, who referred to it as the turbine runner (Figure 3).
The stator has also been called by many names. The illustration in the 1950 Chevrolet Shop Manual (Figure 1) referred to the stator as the secondary pump. 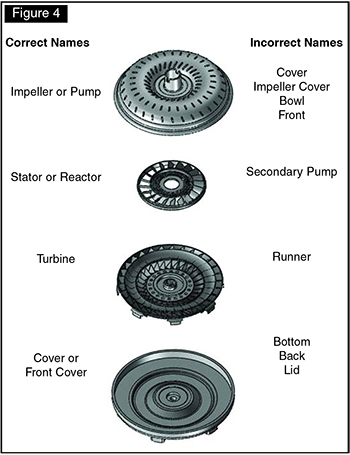 The mid 50’s Packard Ultradrive’s crude stator was referred to as the reactor assembly. Today the term stator assembly is used by most O.E.M., although Ford now uses the term reactor assembly.
The front of the fluid coupling was also the engine’s flywheel, and it retained the flywheel name. When the fluid coupling became the torque converter, the engine’s flywheel was also used as the front component of many early bolt together units. Buick Dyna-flow, Chevrolet, and Chrysler all used this construction. The difference was that the term cover was now being used for the flywheel when it became part of the torque converter housing. The term cover was
probably adopted by the O.E.M. because of the manner used to build their converters. Most O.E.M. procedures started with the impeller and stacked the other components onto the impeller. The front cover was the last component to be added, thus covering the assembly. To this day, the term “cover” is the most universally used term associated with the torque converter.
Figure 4 shows the correct and incorrect names used for the main components of a torque converter.
Be sure to check out: What IS the Correct Name? Part 2
Ed Lee is a Sonnax Technical Specialist who writes on issues of interest to torque converter rebuilders. Sonnax supports the Torque Converter Rebuilders Association.

What IS the Correct Name? Part 2