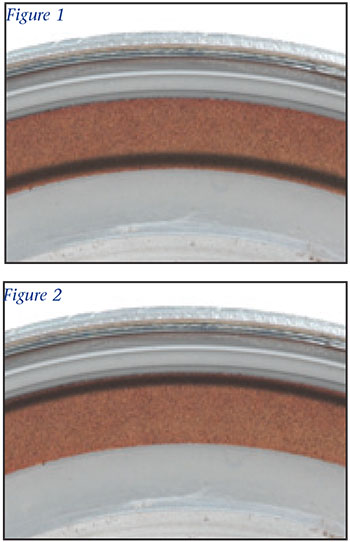 A 604 transmission with a 740 code led to many different approaches and attempts to troubleshoot the underlying problem. As the possible causes were narrowed down, the focus began to turn toward the converter. Replacing the converter with a factory unit eliminated the 740 code, and since the code would show up on any road test, this seemed like the perfect vehicle to identify the root cause.
Time after time, the faulty converter was removed from the vehicle and one change was made or a part replaced before the converter was placed back into the vehicle. After many days and many more R&Rs, the problem was found to be poor converter flow, caused by a solid fiber thrust washer between the cover and turbine hub.
Finding the root cause was time consuming, but the information discovered will prevent the same mistake from being made repeatedly in the future. Some other information was also discovered during the process of inspecting the insides of many low-mileage converters in a short period of time. One was the uneven wear pattern on the new friction material. The 740 codes were proof that a TCC slip had occurred, but the technicians expected to see an even wear pattern down the center of the friction material. However, none of the converters had this wear pattern. Most converters had a dark wear pattern at either the inside or outside edge of the friction material (see Figures 1 and 2). The mystery of why the 740 code happened may have been solved, but several new questions had come up.
To better understand the uneven wear pattern on the new friction material, a test was set up. A fixture was devised to allow air pressure to be applied to the back of the TCC piston and record the deflection of the front of the piston at the same time. The deflection of the front of the piston was measured in three different places with three dial indicators. One of the dial indicators contacted the piston just inside of the friction material surface, one by the I.D. of the piston, and the third was halfway between the other two (see Figure 3). 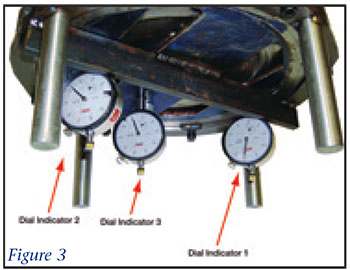 Since the front-wheel-drive Chrysler pistons range in diameter from 10.2" to 11.2", the fixture was made to fit all sizes. A 2° taper was machined at the O.D. of the fixture where it contacts the O.D. of the piston. This kept the test equal with all of the pistons and did not give any pivotal effect on any piston as they deflected forward. The I.D.s of the pistons are all the same diameter. To make sure that pressure was only acting on the surface area of the piston, an OE turbine hub was mounted to the front of the fixture. The OE hub was fitted with OE seals and the pistons were free to move independently of the hub.
Since the area in front of the TCC piston is open to exhaust when the switch valve is stroked to the lockup position for TCC apply, the pressure in front of the piston remains at 0 psi any time the clutch is applied. This allowed for open areas in the front of the fixture for piston movement to be observed.
Since the pressure acting on the front cover of the converter is 0 psi in lockup mode, it was assumed that there was no deflection of the cover and the piston applied against a flat surface. We’ve all learned what happens when we assume. The normal forces within the converter are constantly trying to separate the turbine and the stator and the turbine and the impeller. These two forces, acting on the turbine, force it toward the cover. This force is transferred to the cover through the turbine hub and the thrust washer or bearing that separates them. The greater the acceleration of the vehicle, the greater the force within the converter. (Ballooning is a good example of this).
Normal acceleration will generate enough internal pressure to force the OE cover forward about .030" at the pilot. A billet cover will deflect about one-third this amount or about .010" at the same rate of acceleration. This forward force is increased greatly when the converter is in the TCC apply mode, because, the square inches of the surface of the turbine
hub times the TCC apply pressure (psi) are also acting on the cover. The piston never applies against a flat surface.

The test was done on six different pistons.

1) OE 604 stamped steel piston
2) OE piston with .015" machined off the clutch surface
3) OE piston with .030" machined off the clutch surface
4) Uncut billet 604 piston
5) Billet piston machined .015"
6) Billet piston machined .030"
The pressure that exerted force on the piston started at 20 psi and increased in increments of 10 psi until the pressure regulator read 90 psi. A second gauge was placed in line at the fixture to record any difference caused by a leak.
With all six pistons, both the gauge at the regulator and the gauge at the fixture read the same pressure, from 20 psi to 80 psi. When the regulator was bumped up to 90 psi, the gauge at the fixture would only go up to 84 psi. This was also true when any attempt was made to regulate the pressure even higher. It is interesting to note that the OE apply pressure is about 80 psi.
Starting at the pressure of 20 psi, the readings of the dial indicators were recorded, and each time the pressure that was exerted on the piston was increased by 10 psi, the new readings were also recorded. This was then graphed to show how the deflection of the pistons changed in relationship to the changes in pressure (see Figures 4 and 5). 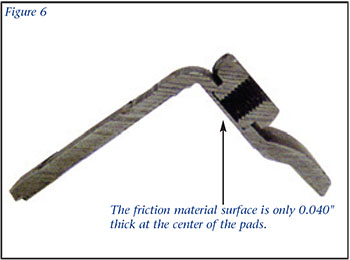