At a recent TASC Force meeting, one of the members expressed concern about an increase in the number of worn-out bores in TCC pistons that he was seeing. Although the problem is prevalent in many different pistons, his main focus was on the GM 298mm pistons. He went on to clarify: The worn-out bores were not being found on OE converters that were coming in for rebuild. The problem was only happening on previously rebuilt converters. The general consensus was that the problem was caused by an out-of-balance condition, and there was a great deal of speculation about why this was happening.
When the OEMs build a converter, they balance the turbine and the clutch individually to a tolerance of 1 gram-inch. The two components are then mated together, with the heavy spot of the turbine indexed directly opposite the heavy spot on the clutch. On the 298mm GM converter, the heavy spot on the turbine is located where the balance weight was added. This spot is marked with a paint dab at the factory (see Figure 1).
The paint dab is usually light gray in color, but unfortunately, the paint dab usually disappears the first time the part is cleaned in a pressure washer. Remember that the turbine is balanced to a tolerance of 1 gram-inch or less, so the heavy spot will be from 0 to 1 gram heavier. The heavy spot on the TCC clutch is located where the notches of metal were removed from the skirt of the piston for balance purposes (see Figure 2).
Since the clutch is balanced to the same tolerance as the turbine, it, too, will be from 0 to 1 gram heavier at this spot. The two parts are indexed together and balanced as a unit. If they now balance to 1 gram-inch or less, the unit is OK. If the balance is off by more than 1 gram-inch, the clutch is rotated one spline left or right and rebalanced. If the balance is now within specs, the unit is OK. But if the weight needed to balance the unit increased when the clutch was rotated, then the clutch is rotated to the opposite direction and rebalanced.
The factory wants to have the heavy spots line up within 45° of direct opposite. You will seldom see a turbine and clutch that is more than 25° from direct opposite. The machine that does the balancing of the turbine and clutch is fully automated. The welding of the weight to the turbine and the milling of the weight from the clutch is done on the machine. The truly remarkable part is that this work is done at a rate of about 120 parts per hour.
Some 500 and 518 TCC pistons have a paint dab like the one seen on the 298mm GM turbines. The paint dab can be either on the front or back side of the clutch and lines up opposite the weight on the turbine. The 518 piston in Figure 3 has the paint dab on the back. 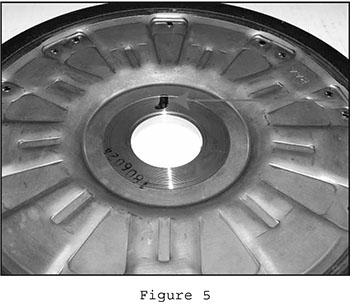 On the Cummins TCC clutch the heavy spot is marked with a stamped arrow (see Figure 4).
You may have noticed that the wear in the bore of the Cummins piston is always on the side of the bore that is opposite the notches in the piston and the arrow.
On some of the import TCC pistons you may find an ink dab marking the heavy spot. Figure 5 is a good example of this on a Honda TCC clutch. The weight on a Honda turbine is indexed on the opposite side (see Figure 6).
Since most pressure washers are not ink spot or paint dab friendly, scratching an “X” across the paint or ink dab would be a good habit to cultivate. This is especially helpful if the original part is less than 1 gram-inch out of balance and no modification is necessary (no weight added, no weight removed).

Since the turbine and the clutch each can be as much as 1 gram-inch heavy on a side and still be within specs, if the two heavy spots are both on the same side, the turbine/clutch unit could be as much as 2 gram-inches out of balance. This could explain the worn-out bores in the clutches.
A good rule of thumb is to index the heavy spot of the turbine (where the weight is added) opposite the heavy spot of the clutch (where the weight has been removed). This will prove beneficial even if your shop doesn’t have a balancer.
Special thanks to Jim Beattie of ATI and Maura Stafford of Sonnax for their technical assistance in writing this article.
Ed Lee is a Sonnax Technical Specialist who writes on issues of interest to torque converter rebuilders. Sonnax supports the Torque Converter Rebuilders Association.