The 300mm converter has become very popular in GM units. First used in the Corvette and F-model vehicles (Firebirds and Camaros), today it is also used in most trucks, vans, and SUVs. The converter is also manufactured in a 280mm version (VJCX, for example).

When the 300mm converters were used only in the Corvettes and F-cars, they had a “graphite type” non-slip clutch lining (see Figure 1). This lining was porous in nature and helped the TCC engagement feel. When the clutch apply strategy evolved to the ECCC strategy, the lining was upgraded to woven carbon (see Figure 2). The graphite type lining was never used in 300mm converters in truck applications. In the truck applications, the lining started off as woven carbon and that lining is still what’s used today.

The springs used in the dampers may be a bit confusing because the dampers can have as many as 12 springs or as few as four. When the 300mm style converters were first introduced, they had two possible dampers available. The damper used in V8 applications had a 6-pocket design and a full set of 12 springs, six inner and six outer (see Figure 3). The damper used for V6 applications was a 4-pocket design and used eight springs, four inner and four outer.

When GM started using ovate (oval) wire spring, the automaker discovered it was possible for a single spring coil with ovate wire to replace a conventional inner and outer set – an obvious cost savings. Eventually the ovate single-coil springs replaced all of the inner and outer spring sets. During the time that the dampers were being transitioned from the conventional inner and outer spring sets to the ovate springs, many different combinations could be found. For instance, it was possible to find two sets of double springs and four single springs in the same damper (see Figure 4). 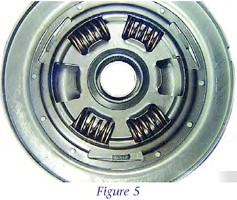 As long as all of the spring cavities (pockets) are being used, this is a good method of separating the V8 from the V6 dampers. This method works well on most 300mm converters, i.e., the TMAX, TMBX, TLBX and TLCX code converters. With the 280mm converters, you may find a few exceptions. For example, the VJCX code converter may be found with a 6-pocket damper with only four pockets being utilized. In this case the damper should be treated as if it was a 4-pocket damper and only used in V6 applications (see Figure 5).

Don’t rely on converter codes to identify a 300mm converter damper. Counting the number of spring pockets is the best method of separating the dampers – provided the spring pockets are being used. Also remember that the graphite-type lining (which looks like most aftermarket high carbon) was only used for early Corvettes and F-cars. Most ECCC applications will use the woven carbon lining.

Performance engine builders have been using ovate springs for valve springs for years. Ovate springs are also being used in the accumulators of some late model 4L60-E transmissions.

For most converter shops, previously trying to identify 300mm dampers was like being placed into a barrel and being told to stand in the corner. Hope this information makes identifying the 300mm dampers a little easier.