Mercedes has used the 722.6 transmission in a number of different vehicles and in combination with different engines. To accommodate these different vehicle and engine combinations, different converters were needed. Many of the converters were similar in appearance and only differed in their bolt circle or diameter.
This could be especially problematic if a converter wasted out and a replacement core had to be found. It was not uncommon to try to line up the converter bolt holes to the flywheel and find that the bolt circle was one-quarter-inch off. Even worse was when the pilot, bolt circle and overall height matched up, but you had a performance issue because the replacement converter was almost an inch different in diameter. The latest Dacco catalog does a good job of identifying these converters.
In 2004 Daimler-Chrysler Corp. started using the 722.6 transmission in the Chrysler TH300. By 2007 there will be 11 part numbers to cover the range of Chrysler 722.6 converters. Torque converter rebuilders may find they never knew how easy they had it when they only had the Mercedes versions to identify.
The chart in Figure 1 shows which part numbers were used with which engines and the years they were produced. 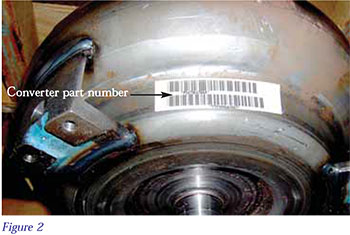 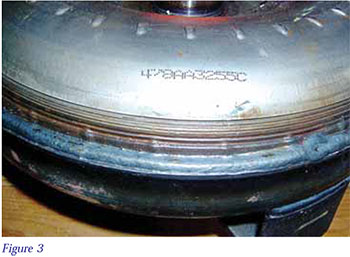 Referring to the chart in Figure 1, you can see that in 2007 the clutch in converter No. 5137631AA changed from a two-stage clutch apply to a single-stage clutch apply and became part No. 4752580AB. You can tell because there is only one number in the Newton/Meter rating of the damper (28.5 NM/Deg). The previous years had two numbers (20 and 70 NM/Deg).
Some of the Mercedes-built converters also have Chrysler part numbers. These converters will have Mercedes-size pilots because they are usually found behind Mercedes power plants. The Sprinter vans and Chrysler Crossfire are good examples of these. The Sprinter converters were first used in 2002 behind the 2.7L diesel engines. They evolved with the 2.8L and 2.9L engines through 2006. The Chrysler part number is 5104567AA and crosses over to Mercedes part No. 9032500002. The Crossfire uses two different converters: the 3.2L non-turbo is part No. 5098047AA and crosses over to Mercedes part No. A2102500702. This is also Dacco part No. MC18. The turbo-charged 3.2L Crossfire uses part No. 5137842AA, which crosses over to Mercedes part No. A2112500302. One nice feature of having Mercedes-built converters used in Chrysler applications is the Chrysler identification numbers on the outside of the converters.
Hope this information makes identifying converters a little easier.
Special thanks to Lou Darling, senior specialist at T/C Engineering DCX for his technical assistance in writing this article.
Ed Lee is a Sonnax Technical Specialist who writes on issues of interest to torque converter rebuilders. Sonnax supports the Torque Converter Rebuilders Association.