If you were raised in a religious family you probably heard that “cleanliness is next to godliness.” If you happen to be the parent of a 4-year old, you’ve learned that cleanliness is next to impossible. In the transmission industry, cleanliness is a necessity. One small particle can stick a valve or cause a solenoid to malfunction and turn an otherwise perfect job into a nightmare. 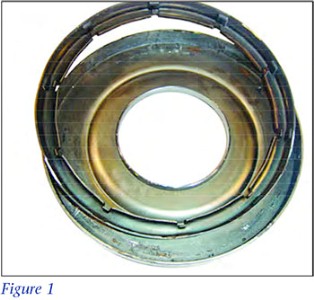 Torque converters have always been recognized as one of the primary catch basins for transmission contaminates. Torque converter rebuilders recognized that contaminates accumulate in the areas of little or no flow, and did their best to clean these areas. The early Ford converters that had smooth impeller exteriors had especially large areas that would trap contaminates. The torque converter rebuilders would punch holes into the area between the impeller bowl and the inner wall that retained the vanes and flush out as much of this debris as possible.
Even with all of this extra effort, many early converter rebuilders affectionately referred to this converter as the “transmission rebuilder’s nightmare.” In the early ’80s the focus on converter contaminates switched to the TCC clutches and damper assemblies. For years, presenters at seminars have warned about the necessity of cleaning the lingering particles out of these components. Recently several companies have recommended that the welded-in spring retainer be removed from the TCC piston on the front-wheel-drive Chryslers for proper cleaning (see Figure 1). 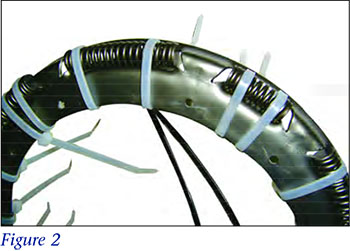 The newest version of the front-wheel-drive Chrysler TCC piston (see the November 2006 issue of Transmission Digest) is also a good catch basin for contaminates. The new piston can be easily disassembled and cleaned by removing the rivets that retain the damper assembly. Unfortunately, reassembling the damper assembly has the same degree of difficulty as putting toothpaste back into the tube. Here are some tips to make the task easier.
What makes the job difficult is that both ends of all 10 springs must be held in position behind the small tabs on the spring retainer during reassembly. Small zip ties (less than .055” thick) do a good job of retaining the springs for reassembly (see Figure 2).
If the zip ties are any thicker than .055”, the retainer will not fit into the piston. Once the damper assembly has been positioned in the piston, it can be secured with one or two bolts placed through the rivet holes. Then the zip ties can be cut and removed and the riveting operation can be completed (see Figure 3).
Communicate With Your Converter Rebuilder
D 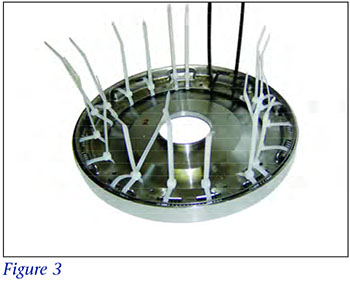 isassembling TCC pistons and damper assemblers for better cleaning is very time consuming. Consider this fact the next time you’re beating up your converter rebuilder for a better price and then buy from their competition because of a $5 difference. Anytime price is the major focus, quality is sacrificed. The quality of a product must be at a certain level before price is considered. Ask your rebuilder what has been done to the converter to justify his or her price. Give rebuilders the opportunity to tell you what makes their converters a better value even if the price is higher. No one wants to be gouged
on price, but the purchasers must be willing to take some of the responsibility for a lesser-quality product if they have demanded a lower price.
If purchasers are going to demand anything, it should be a level of quality.
Ed Lee is a Sonnax Technical Specialist who writes on issues of interest to torque converter rebuilders. Sonnax supports the Torque Converter Rebuilders Association.