More Details: When to Shim 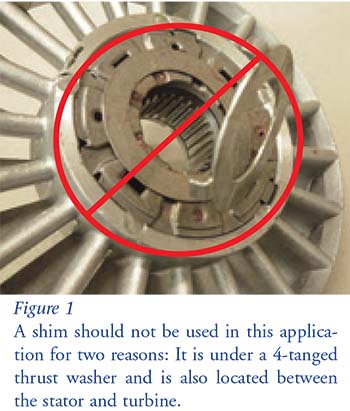 Producing a quality rebuilt torque converter is a major accomplishment. You have to correctly perform many rebuild procedures to end up with a quality finished product. Simply knowing the difference between the right and wrong way of doing a rebuild procedure doesn’t always guarantee success. It’s important to pay attention to the many details of the rebuild, and the proper use of shims is one such detail.
When torque converters were first introduced, all of the torque converters were bolted together. Rebuilding the early torque converters was done in transmission shops by transmission rebuilders. The only information they had available was found in the factory shop manuals. Those shop manuals included the torque converter in the transmission section, and the factory support for the early torque converters was very good. The original equipment manufacturers supplied selective shims and wear plates in many different thicknesses.
Of course, at that time all but the Packard and Studebaker converters were non-lockups, and endplay was the only adjustment that the builder had to be concerned about. The builder would still grumble when he had to put the converter together with two or three bolts, check the endplay, and select the appropriate selective thrust washer. In the early Ford MX and Chevrolet Powerglide®converters, the endplay was adjusted by using selective thrust washers between the turbine and cover or between the stator and impeller.
The present-day torque converters are a lot more difficult to rebuild. Since all of the current torque converters are welded together, the rebuilder still has to maintain the proper endplay, but also has to be concerned with the overall height and internal clearance. To make things worse, most of today’s converters have lockup clutches, and the clutch release clearance must be considered when adjusting the endplay, internal clearance and overall height.
Selective thrust washers and wear plates are still available today along with a large selection of shims. Shims may be used safely and effectively if you follow a few simple rules.
Where to Use Shims
The best place to use shims is to back up bearings or wear plates at the ends of the converter stack-up – between the stator and impeller at one end, and between the turbine and cover at the other.
Where Not to Use Shims 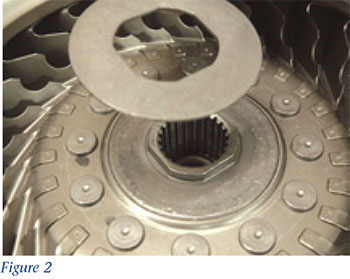 Shims should never be used under a tanged thrust washer. The thickness of the shim will provide the tang less support and cause its eventual failure. Never use a shim to back up a bearing or thrust washer between the stator and turbine (see Figure 1). The internal forces of the converter are constantly trying to separate the stator and turbine, and a shim will increase the chance of a loss of piloting. The selective wear plate with the four-sided I.D. in the rear-wheeldrive Chryslers is the only exception to this rule. This wear plate is the safest place to shim this converter (see Figure 2).
Never assume that a shim and bearing with the same I.D. and O.D. dimensions can be used in the same location. In many cases the I.D. of a shim will rest against the radius of a mating part because of its lack of a radius. All bearings have a radiused edge at their I.D. and do not have the same problem. The shim’s contact with this radius will cause incorrect endplay readings and will cause contamination as the shim wears. 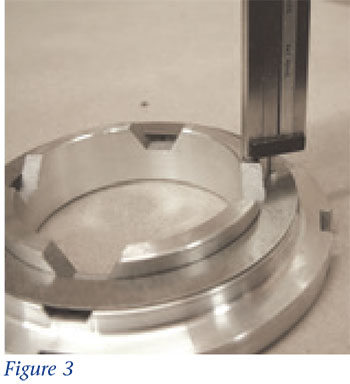 Always consider how much piloting area is remaining on a bearing when choosing a shim (see Figure 3). The rule for piloting a bearing is the same for all bearings, regardless of whether the bearing is piloted off its inside or outside diameter. You must have 80 percent of the thickness of the bearing supported.
The load that a shim is subjected to is another factor that must be considered when selecting a shim. Shims that are subjected to heavy loads should be at least .020” to .030” thick. Thinner shims should be limited to areas that carry the lighter loads. A shim that is used as a wear plate needs to be about as hard as a bearing race (58 to 60 Rockwell). Fortunately, most shims only take up space and can be manufactured out of much softer metal. Since shims are stamped out of thin metal, there is always the possibility of a frayed edge. A frayed edge can cause incorrect adjustments, and may produce contamination. Some shops are tumbling shims to reduce these effects.
When any machine work is done to a converter, it usually decreases the overall height of the converter. The use of shims can be a good method of compensating for this machine work – when they are used properly.
Ed Lee is a Sonnax Technical Specialist who writes on issues of interest to torque converter rebuilders. Sonnax supports the Torque Converter Rebuilders Association.