As the turbine speed increases and approaches the speed of the impeller, the amount of fluid that the stator redirects decreases. The less the stator redirects the fluid, the lower the torque multiplication. When the stator stops redirecting the fluid, the torque converter no longer multiplies torque. At this point there is no torque multiplication and the stator begins to rotate with the turbine and impeller. In applications without a one-way clutch, the stator would create drag causing heat and slowing down the vehicle speed.

What is Stall Speed?

Stall speed is a term frequently used but it is also commonly misunderstood. Stall speed is the maximum RPM at which the impeller/engine can rotate if the transmission output is constrained. The engine RPM can no longer increase and the engine speed “stalls.” Flash stall is the RPM at which the converter will “flash” right after the transbrake (or brake) is released. Car weight, tire size, suspension setup, etc. all affect flash stall speed, making it very difficult to predict.

Brake stall is the maximum RPM at which the engine (and impeller) can turn when the turbine rotation is held (car is in gear and the transbrake or brakes are holding). Brake stall is not related to the car’s wheel brakes. The two things that determine the brake stall speed are the engine’s peak torque and the blade geometry (or K Factor) of the impeller, stator and turbine blades.

Suspension, tires, weight, gear ratios, etc. do not influence brake stall. Brake stall can easily be calculated and can be summed up in the following formula:

How Can I Determine the Stall Speed of My Converter? 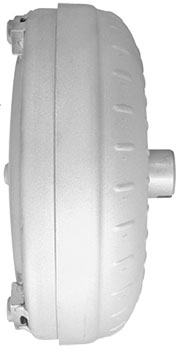 Use extreme caution when performing any stall tests. First and foremost, make sure the car is secure and that there is plenty of room in front of the car in case the transbrake (or brakes) fail. Also, fluid temperature in the torque converter rises very rapidly when the converter is held at stall. A 10-second maximum stall time, with several minutes of operation for cool down before conducting another test, is strongly recommended.

Brake stall speed testing is performed by putting the car into gear and holding the drivetrain while bringing the engine to wide-open throttle. Using a transbrake is the easiest and surest method for doing this. Testing the brake stall speed by holding the wheel brakes and running the engine against the locked brakes will usually result in wheel rotation before true stall speed is reached. The engine simply overpowers the ability of the brakes to hold the car. When rotation starts, you are no longer at stall and you cannot check the stall speed using this method.

An alternate method is to check the flash stall. This is done by observing the engine RPM reached right after release of the transbrake (or brakes) at launch. Inconsistencies caused by wheel spin and the short time allowed for RPM observation makes the use of this method questionable. Changes to car weight (and distribution), suspension, tires, tire pressure, track conditions or weather can affect the flash stall speed.
The Vehicle is Running Stronger than Ever. What Happened to the Converter?

Engine output is what really determines the stall speed for a given torque converter. For this reason, the converter you have been using may not be adequate when you increase the performance of your engine. This is particularly true when using a higher performance camshaft, improved heads, carburetion or manifolds. If you increase the available power going into the same converter, the stall speed will be higher. The higher stall speed may be nowhere near the optimum for the new engine combination to the point where the overall performance may not only remain unchanged, but could actually suffer. Remember, you want to have the stall speed matched to the particular engine and vehicle combination. Changes in altitude, temperature and humidity can greatly affect engine torque, which will change the stall speed.

Picking the correct stall speed and Stall Torque Ratio (or torque multiplication) is crucial in making a car perform the way the customer desires. Selection of the stall speed and STR for the customer’s vehicle should be matched to the engine’s peak torque, torque curve and the vehicle weight. You want a stall speed that will keep an engine in its powerband as much as possible.

Typically, the desired brake stall speed would be 500 to 700 RPM below the engine RPM at peak torque. This will allow the car to accelerate through the powerband. Too low a stall speed and the car will “bog down” at launch. Conversely, too high a stall speed and the engine will “wind out” at the end of the run. The STR should be as high as track conditions will allow. The right STR will allow the car to have it’s best 60 foot times, which translates into lower E.T.s. With an STR too high, the car will be difficult to control and 60 foot times and elapsed times will be inconsistent. On the other hand, for customers who use their car for cruising or daily driving, you do not want to keep the engine rpm too high or cause the car to launch hard at every stoplight.

Even after you have picked the correct stall speed, it is still challenging to build the correct torque converter. The more accurately you can determine the engine’s torque, the closer you can come to getting the stall speed you desire. Customers rarely know the amount of torque their engine produces. In these situations, it is better to conservatively estimate the engine torque than it is to overestimate it. If you overestimate the torque output, the resulting stall speed will be lower than intended and is likely to make the vehicle slow off the line, increasing the E.T.

Does Stall Speed Affect Normal Street Driving?
Generally speaking, torque converters with stall speeds up to approximately 3000 RPM do not adversely affect normal driving. The vehicle will begin to roll normally and acceleration will be favorably influenced when higher stall speed converters are used. A very high stall speed converter (above 3000 RPM) would not be satisfactory for street use.

What Core Do I Use?

When building a performance converter based on the GM 245mm core, the easiest and quickest way to determine the correct core is to use the Sonnax Stall Speed Chart. Start by determining how much torque the engine produces and what stall speed you wish to achieve. On the lefthand column of the chart, find the torque level that is closest to the engine torque. Next, scan the row to the right until you find the stall speed required. Listed below the stall speed is the maximum output torque (based on STR). The GM 245mm torque converter core listed at the top of the column is the one that you will need.

In many instances, there is more than one core that will give you a stall speed that will work for the customer’s vehicle. The STR will help to determine which core to use.

Do I Need to be Concerned with the Stator’s One-Way Clutch?

When the difference between the turbine speed and the impeller (engine) speed is greatest, the amount of fluid that the stator blades redirect is also at its highest. When the converter is at stall, the stator is redirecting the most flow and the converter has achieved the Stall Torque Ratio (STR) or the maximum ratio between the input and output torque.

The amount of torque developed by the stator due to fluid redirection is equal to the difference between the output torque and the input torque. This is shown in the following equation:

This is the amount of torque that is applied to the one-way clutch. If the clutch fails to hold, there will be no torque multiplication.

Typically, the OEM GM 245mm clutch can hold up to 400 lb-ft of torque. If the torque is increased beyond that, the OEM one-way clutch could fail. If the one-way clutch fails, the converter will lose its torque multiplication. The customer will probably complain that the car went from working well to bogging after launch, and has trouble reaching stall speed. If there are no engine issues, the one-way clutch is a likely culprit.

What Can I Do to Improve Efficiency?

The peak efficiency of a torque converter is the maximum ratio of output speed versus input speed. This occurs when the converter no longer multiplies torque (this is known as the coupling speed). Stock torque converters are typically 85% efficient, while racing units can achieve as high as 95% efficiency.

*Check out the full list of new torque converter parts available from Sonnax!