Diagnosing the Elusive NO REVERSE with the 4L80-E

All too often a problem arises in the shop that just pushes our patience to the limit. Never fails, the customer needed the vehicle last week and is not letting up on the pressure to get the vehicle delivered. When time demands become overwhelming, such as in this scenario, it is very easy to get sidetracked. In our rush, we often ignore the diagnostic basics which would have led us to the root of the problem. A real-life situation reminded me how we all fall into this trap and need to remember that diagnostic time typically saves money versus guesswork, which can be very expensive when it does not work.

Diagnosing a shift concern can be easy, as long as you understand some basic techniques to help get to the root of the problem. A reliable and orderly diagnostic approach is splitting the circuits. Splitting the circuits means separating and analyzing the hydraulic, electrical and mechanical issues which could create the problem. Let's follow the flow of diagnosis in this one together. Make sure you have the following on hand: a line pressure test spec sheet with test port locations, and a clutch and band chart to help eliminate other areas which may be associated with the problem shift.

In the case of "No Reverse," the players inside the transmission are:

Depending on the test results, we know the following:

If there was no engine braking in manual low, there may be a mechanical issue with the Low/Reverse Band (we will confirm this in the last part of these three test areas) or a valve body issue such as a missing or leaking checkball. These will be separated during the mechanical test to know where the problem area is. The no engine braking in manual 1st gear is a great clue that may lead us to the band, but there are still other factors to look at. Remember, splitting the circuits means separating the hydraulic, electrical and/or mechanical issues which can create the problem. The first step was verifying pressure.

Is this tech helpful? Provide us with your feedback at the end of the article.

Splitting the circuits electrically is a very basic step in the "No Reverse" shift concern diagnosis. Electrically controlled transmissions generally have a built-in safety program that prevents the transmission parts from breaking based on a rolling speed shift reference during the reverse engagement. If the control module senses a speed reference greater than 8mph during the shift into reverse, it has the ability to prevent the shift from happening. That being said, it is a very simple test to eliminate the electrical part of this one. Unplug the electrical connector to the transmission (this will force a fail-safe shift pattern eliminating the computer's ability to prevent the shift) and see if the reverse shift comes back. Understand, sometimes this test can be misleading: if there is a subtle hydraulic leak in one of the containment areas, the leak may be overcome with "max" line pressure. Unplugged, the line pressure in the transmission will go to an uncontrolled max value that can mask a leaking concern inside the unit.

Answers to the test results of case connector unplugged:

So far here is what we know in helping to find the "no reverse" issue.

This leaves us with the last of the three areas in diagnosis: the mechanical part. 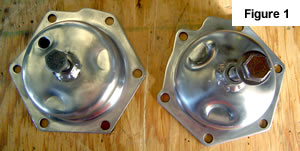 For this "No Reverse" shift issue we are going to mechanically split the circuits by blocking the Low/Reverse band. To do this, we will have to have the oil pan removed. It is a very simple procedure and can be done two different ways. First, make up a special tool that will allow you to manually lock the servo down. To do this, use an old servo cover and drill a hole down the center of the cover. With the hole drilled, weld a nut on top of the cover to allow the use of a bolt to lock the band tight (mechanically) - see Figure 1. Once you have the tool, there are two ways to do the test in the vehicle. One can be very messy if you are not prepared for the test and one is clean, as the oil pan is reinstalled onto the transmission.

Let's look at the two tests: 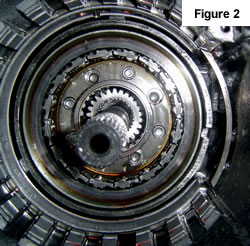 Pan Off: Install test cover for the Low/Reverse Band. You will need to make a second tool from an oil pick-up tube off an old filter (cut the neck off the filter and clean it for the tool). Install a rubber hose onto the tube, making sure that the hose is long enough to reach into an oil filled bucket and allow the pick-up tube to be installed into the oil pump. This is a fast test, but is messy so be careful. It is a good idea to hang plastic shield around the transmission that will direct oil into the catch bucket! Start the vehicle in Neutral with the parking brake applied (this helps in preventing the mess) and quickly shift to reverse to verify whether the band is holding with engine load. Note: if you happen to start in park and shift to reverse, it will squirt oil (big mess). Question to be answered: Does it now have reverse? This is the messy test!

Pan On: Much cleaner test, but also much longer in time to get the answer. Install the locking tool onto the Low/Reverse servo. Make sure that the bolt on the locking tool allows the oil pan to be reinstalled and fill the pan with oil. With the oil pan installed and filled to the proper oil level, make the shift test to see if you now have reverse with the parking brake applied. Does the engine hold back? This is the cleaner test!

If during the test our answer gives us a positive shift into reverse, we know there is an issue applying the band that can typically be resolved without removing the transmission. Remove the valve body and check for blockage in the 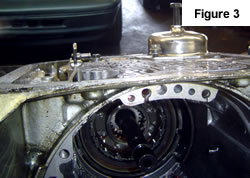 Low/Reverse servo feed passages in the case and/or the separator plate with gasket issues. While the valve body is on the bench, carefully inspect the body for valves sticking and make sure that there is no issue with checkballs #7 and #11, which are housed in sleeves in the valve body (both have been known to cause issues).

Inspecting on the Bench: 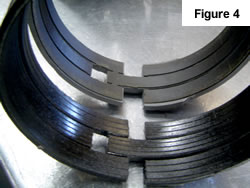 Dismantle the transmission to the point of being able to see the direct clutch drum in the case with the valve body removed. Make a simple air test to the direct clutch through the case to verify "both the feed passages" apply and hold. If it fails this test, remove and verify problem areas in the drum or on the support and retest. Air test for the drum passages, remove the drum and the center support/second clutch drum from the case. Visually inspect the band and the drum for broken pieces (Figure 2). Install the special test tool that allows the band to be mechanically applied. Lock the band tight and verify that the band ends do not touch, preventing a positive lock on the drum (Figure 3). 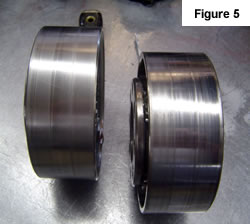 Important to Note: Installing the improper band is a common cause of the "No Reverse" after repair due to rapid wear. Why does this wear occur? In 1995 there was a change in both the surface of the drum and the lining of the band in the 4L80-E. In addition, there also was a change in the boost valve located in the front pump for reverse line pressure boost. The differences in the bands are very clear (Figure 4). Early bands had a grooved lining and later bands were smooth lined. Along with this change, the surface of the drum is critical for the life of the band. Early drums did not have a smooth finish on them to allow for the use of the grooved band. The late drum is smooth finished to allow use of the smooth-lined band (Figure 5). If you happen to put the smooth-lined band onto the drum that has the rougher finish, the band will fail, causing the lining to be removed (No Reverse).

Diagnosis often seems as though it takes too much time, but in the grand scheme of things, diagnosis truly saves time. Remember the simple rules in diagnosis of separating the three areas of the transmissions (Hydraulic, Electric and Mechanical), as this does save that valuable time. Let's all be successful, keep those TECH TIPS coming. For the story behind this article, read Reverse Drum Wear: A 4L80-E True Story.