The Aisin AW TR-60SN / VW 09D/T transmissions are found in the 2002-2010 VW Touareg and the 2003-2010 Porsche Cayenne. There have been reports of the front seal blowing out after the torque converter and related parts have been replaced. The root cause of the seal blowing out is the buildup of pressure because the drain back passage that normally vents the area behind the front seal is blocked. This area is normally vented through the stator support/pump cover. The seal blow-out issue occurs when the pump (body and gears) is mated to the incorrect stator support (pump cover) and blocks the drain back passage. To understand how easy it is to make this mismatch, you need to know the large number of possible combinations. Be aware that the seal blow-out problem is only one of several issues which can be created if you mismatch components.

The first thing that you will find is that the vehicles with the smaller engines have a torque converter with a single lock-up clutch, and the vehicles with the larger engines have a clutch pack-type lock-up clutch similar to the Mercedes 722.6. The Torque Converter Clutch (TCC) circuit for the single-clutch converter uses the conventional two- path lock-up hydraulics where the converter charge/TCC release oil enters the converter through the input shaft. The clutch pack style of this converter uses a three- path hydraulic lock-up circuit where the TCC apply oil enters the converter through the input shaft. Because of the differences in the two- and three-path hydraulic circuits, many of the related parts are different. The input shaft for the two-path lock-up circuit is smaller in diameter and has three sealing rings, while the larger diameter input shaft used with the three-path circuit has four sealing rings. These shafts are not interchangeable. The valve bodies for the two- and three-path units also are different. Mismatching the valve bodies will either result in no lockup or create a condition where the engine will stall as soon as the vehicle is placed into gear.

The early bushing-style converters can be upgraded to the late-model bearing style by simply replacing the impeller hubs. 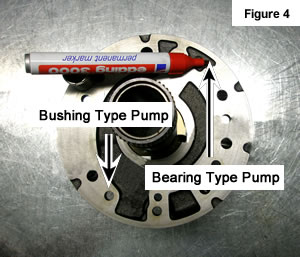 Since the early bushing-style pumps have a high failure rate, they are not as desirable or readily available. It is a common practice to upgrade to the bearing-style pump, but this is where the mismatch occurs that causes the seal to blow out.

When you are mating a late-model pump to an early-model stator support/pump cover, you must drill the stator support so that the drain back passage continues through and lines up with the pump body passage (Figure 4).

If you are not replacing the pump assembly as a unit, always be alert to the possibility of a blocked drain back passage.