It Is Never Wrong to Do Right

We work in an exciting industry. It seems hardly anything stays the same. We see change constantly and most of it is for the good, but every once in a while the industry’s changes outrun a technician’s ability to troubleshoot and repair the new systems. It seems in our shop we just can’t get enough education fast enough at times. Here is a real-life example of our shop “wondering in the wilderness.”

The vehicle was a 2006 Pontiac G6 2.4 liter engine and a 4T40-E transaxle. The customer complained that it was shifting hard all the time. Ok, so let’s take a survey: how many of you have your hand up saying, “I want that job, bring it on?” My thoughts when I saw the repair order with that complaint were that it should be a fast fix and easy to troubleshoot. Oh boy, was I wrong.

A quick scan with the Tech 2 revealed no transmission trouble codes. The Pontiac did have three engine trouble codes, though: P0171 (Fuel Trim system lean), P0010 (Intake Camshaft Position actuator solenoid circuit) and P0011 (Intake Camshaft Position system performance). We forgot to look at the freeze frame records to see a history of when and how many times the codes had been triggered. We cleared the codes and started the engine to find the P0171 code came back sitting idling for less than 1 minute. As soon as the code tripped, the transaxle hard shifting complaint returned. We suspected that the transaxle was being commanded high line. Sure enough, a quick look in the Transmission Control Module’s (TCM) data showed that the Pressure Control Solenoid (PCS) amps were at 0.00, commanding high line (Figure 1).

We were sort of scratching our heads at this point, wondering: can a DTC P0171 cause high line pressure? We cleared the P0171 code and restarted the engine, but this time we were monitoring the transmission’s PCS amperage. As soon as the P0171 test completed and failed, the PCS went from normal line pressure command 0.86 Amps to high line pressure 0.00 Amps. The P0171 was the only code coming back at the time.

We looked up the P0171 code in two reliable databases and did not find any reference to a high line pressure command being an anticipated response when the code is tripped. Since it seemed to be the cause of the high line in our situation, we decided “it is never wrong to do right,” and went out of our comfort zone to attempt to repair a fuel trim lean code. Stepping into the general repair field is a place our shop doesn’t go unless it is to fix a transmission-related concern. In this case, we were only going into general repair to get rid of the harsh shift the customer was complaining about. The motto at our shop is: “We will fix your transmission problem from the battery to the tires.”

We monitored the fuel trim and saw that idling the Long Term Fuel Trim (LTFT) (remember idling was when we noticed the P0171 test fail) was at +19 and the Short Term Fuel Trim (STFT) was at +30 (Figure 2).

So the computer was adding a lot of fuel, for some reason. We monitored the data and didn’t see anything sticking out that would indicate why the PCM would need to add so much fuel. After a little research, we checked the air filter, fuel pump pressure and even did an individual injector pressure drop test that sort of checks for clogged injectors. All of that was good.

It looked like we had the ability to deliver plenty of fuel, so the next thing was to verify air flow and vacuum readings. With the engine off, manifold pressure sensor (MAP) was reading 100 kPa, just like the barometric pressure sensor. With the engine idling at 650 RPM, we monitored the MAP and it was at 37 kPa, which is exactly where it should be.

The next big player in the air flow is the Mass Air Flow (MAF) sensor. We took the Snap-on® Vantage PRO™ and followed the instructions in it to conduct a MAF test.

We replaced the MAF sensor and BOOM! the P0171 test went from last test failed to passed. The STFT and LTFT were both much lower (Figure 4).

A quick look at the transmission’s PCS amperage proved that line pressure was back to normal (Figure 5).

We noticed something very unique after the MAF was replaced and the test passed successfully: we didn’t have to clear the P0171 code to make the computer quit commanding high line pressure. The instant the PCM completed a P0171 test and passed it, the amperage going to the PCS went back to normal and the high line was gone. After seeing this, I got to wondering if that was really the case. I decided to start the engine and monitor the fuel trim and the PCS amperage at the same time. While the engine was running, I removed the two screws holding the MAF in and slid it out of the air box enough to cause the fuel trim to go high. The instant the P0171 test failed, the line pressure went high. Then, while the engine was still running, I pushed the MAF back in place, and as soon as the computer ran the P0171 test and it passed, the line pressure went back to normal.

I know you are saying “big deal,” but consider this: we could have a sensor that – if it was on the edge of passing and failing the P0171 test – could flip-flop back and forth from commanded high line pressure to normal line pressure. We could have a customer come in with an intermittent harsh shift and this situation could potentially cause us to have a difficult time recreating the complaint. Of course, the key here is that it should have a code stored, which should help lead us to monitoring the fuel trim.

Another special note I want to add is that the criteria for the computer to run the P0171 fuel trim test requires there be more than 10% of fuel in the tank. We noticed that, while testing this vehicle, the P0171 fuel trim test quit running. We found this occurred because the fuel level had dropped to just below 1/8 of a tank while we were running the engine. So, if the customer brings in a harsh shift complaint with a P0171 and the fuel is low, you will not be able to duplicate the high line pressure until you put some gas in it. So keep a check on the fuel level. 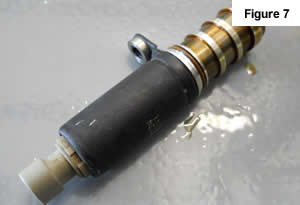 At this point we were excited that we really had learned a lot about fuel trim and we were ready to take this Pontiac for a test drive. Down the road we went and it worked great…well, sort of. You know the routine, just as we almost get back to the shop and call it done, the 1-2 shift bangs. We connected a scanner and monitored the PCS amps and there the PCS amperage was at that ugly 0.00 again. We scanned the codes and discovered a P0011 (Intake Camshaft Position system performance) code. We cleared the code, the PCS amps went back to normal and the harsh shifts went away. Oh no, round two! After more general repair-type testing, we found that the camshaft intake valve actuator (Figure 6 and 7) was bad.

We replaced the actuator and cleared the codes and all was well…for the time being. Who knows, the Pontiac could be back next week with an EVAP code and hard shifting. The thing I find odd about all of this is that nothing we found indicates that the TCM/PCM will command high line pressure as an action taken once the P0171 test fails or the DTC P0011 (Intake Camshaft Position system performance) is triggered. So be ready and remember, “it is never wrong to do right” by fixing those engine codes.