Is It Safe to Drive?

"Is it safe to drive?" Or how about "How long do you think it will last?" "Can I make it on my trip and back?" Do any of these questions ring a bell? If you have been in the transmission business for awhile, you have heard these exact questions and similar ones many times before. With the economy struggling and customers "scraping" to get by, we understand why they are apt to ask such questions. 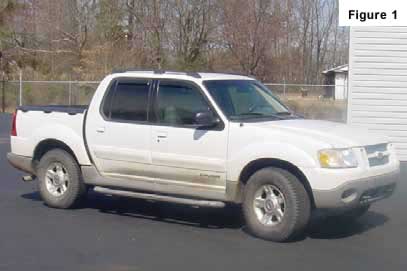 Knowing about specific transmission problems still doesn't stop folks from asking if it's ok to keep driving their vehicle. A customer has a 4L60-E transmission and it has no reverse, 2nd or 4th, and he wants to know if he can drive it to work this week or would it last until his next payday? Another customer has a 4T65-E with a P1811 code and wants to know if they can make a trip over the weekend, or yet another customer with a 5R55E and broken 3rd gear band wants to know if it is safe to drive. These are questions we have answered in our shop many times over the years, and most of the time we tell them: "Yes, you can drive it, but it could fail on you at any time." I can say that after a recent 5R55E that came in, we've changed our attitude about what we tell our customers about driving transmissions with problems. The vehicle that opened our eyes was a 2001 Ford Explorer Sport Trac with a 5R55E in it (Figure 1).

The Explorer comes in on a wrecker, we'd never worked on it before and this is a first time customer for us. The customer tells the secretary on the phone that they were driving down the road at better than 50mph when the vehicle made a loud pop and it quit pulling. We go out and try to start the Explorer and it will not start. The shifter cable feels as if it is disconnected, but a look under the vehicle makes it evident it has much more than a broken shifter cable. Time to get the riding lawn mower and pull it in the shop.

Once in the shop, we did a scan on the Explorer and it had several codes, including several electrical circuit codes for the transmission. But a code that stuck out was a P0733, which is a ratio error in 3rd gear. On the 5R55E, the P0733 usually means a broken intermediate band. We also noticed that both air bags had been activated recently. We lifted the vehicle and were amazed when we saw how much damage there was. All the electrical circuit codes were showing up because the transmission main wiring harness had been severed by pieces of the transmission case. It had been flying pieces of the case which also broke the shifter cable, causing the disconnected feel we noticed earlier.

I called the customer and asked him what happened. He told me he was driving down the road and heard a noise in the transmission area, and a split second after that BOOM, the air bags went off. Can you imagine driving down the road and both air bags going off, and you are not even in an accident... yet!? Thank the Lord he managed to pull over and stop the vehicle without having an accident. I asked him if he had been having transmission problems before this happened, and he said, "Well it had been shifting late for awhile." I asked him how long had the O.D. light been flashing, knowing it had the P0733 on it, and he said, "For a few months."

As you can see in Figure 2, the Explorer's transmission case was destroyed, with the damage appearing to originate in the area of the intermediate band. The next photo is a close-up of the direct drum... or should I say what is left of the direct drum (Figure 3).

I will be first to admit I know very little about the air bag or Restraint Control System. I did a little research and found out that the Restraint Control Module is located inside the cab just above the bell housing. I have no idea why it discharged both air bags, but I can assure you they both went off (Figure 5). The Explorer was in great shape and nothing was damaged except the transmission, shifter cable, transmission wiring harness and, of course, the air bag system. With no signs of any other impact or accident related damage, I can only conclude that the self destructing transmission triggered the air bag deployment.

When I first looked at this vehicle, it took awhile to sink in just what had happened here. Now as I look back and think it over, I am SO THANKFUL that this is not a vehicle I checked out and told the customer it was safe to drive. The funny thing is the very next day I had a customer come in with a 2000 Ford Ranger with a broken lowreverse band - you know, it will not back up and has no engine braking in manual low - and the customer asked me if it was safe to drive it. Before I could stop myself, I told them they could, but, "I would recommend wearing a helmet." Then I explained to them what happened the day before.

I think this is a serious issue, even though it is rare for such damage to occur. I now know that a situation such as this could happen, that there is the possibility of air bags going off while driving down the road as the result of transmission failure. Clearly, it could cause a terrible accident and even loss of life.

Is it safe to drive? I know I will think before I ever say yes again.