General Motors introduced the 6T70/75 transmission in 2007. This transmission is a fully automatic 6 speed unit that features clutch to clutch shifting. It is available in both front wheel and all wheel drive vehicles. It was first used with the 3.6L V6 motor in the 2007 GMC Acadia and Pontiac G-6. The torque converter is a four (4) element unit: impeller, turbine, stator, and TCC Clutch. A collaborative effort by Ford and General Motors, it is manufactured by ZF Sachs. The converter is available with either three (3), four (4) or six (6) mounting pads. The Ford influence explains why a four (4) mounting pad unit can be found in a GM vehicle (Figure 1).

To date most of the converters seen at converter remanufacturing facilities have had vibration and/or leak complaints. After taking a closer look at the attachment between the pilot and cover, it is easy to see why (Figure 2). Welding the pilot on in this manner creates a weak point. If the pilot is already cracked or broken when it arrives at your shop, you will need to install an alignment fixture before re-welding. The alignment fixture is necessary to ensure that the pilot is restored to its proper centerline prior to welding. Even if the pilot is still firmly attached to the cover, you will want to run a bead of weld around the seam that joins the pilot to the cover for added insurance. 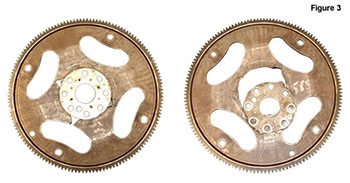 The problems associated with the 6T70/75 converter are a good reason to maintain communication between the converter and transmission shops. In most cases when the converter pilot is cracked or broken, the flex plate is also cracked or broken. The transmission shop must be made aware of this because on this unit, a cracked flex plate is difficult to see. The cracks are often hidden because the flex plate has a thin (.035" to .040") shim permanently attached at the mounting bolt area. This thin shim will cover most cracks until the flex plate eventually breaks into two pieces (Figure 3).

Also, it is not possible to do a satisfactory flex plate inspection from the transmission side of this flex plate. Proper checking procedure requires removal of the flex plate and a thorough inspection viewed from the engine side.