The image of a target is often used in education or training. The bulls-eye is the topic of most importance. It’s what you “Need to Know,” with each consecutive ring or “Nice to Know” reinforcing or providing that information. 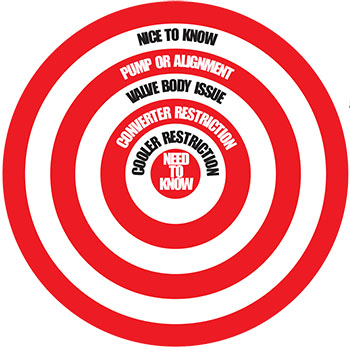 In this case, the bull’s eye, what you “Need to Know,” are the causes of the following:
Consecutive Rings Include:
Cooler Restriction
This is the by far the most common issue. Possible restrictions include the drainback fitting, auxiliary or radiator-mounted coolers or the lines. These restrictions not only reduce flow, seen as lube failures, but also negatively affect the converter and valve control.
This restriction (when TCC is not applied) reacts on the largest switch valve diameter, by forcing it toward the spring and positioning the valve as seen in Figure 1. You see how the spools can stage mid-circuit, which further restricts converter and cooler flow. This effect varies with 46 or 47 RH/RE cooler lines and may become a problem as head pressure nears 80 psi or more (see Figure 2).
The most effective verification technique is to temporarily bypass the cooler circuit and re-test. If you “hit the bull’s eye” and the problem is eliminated, track down your restriction.
Converter Restriction 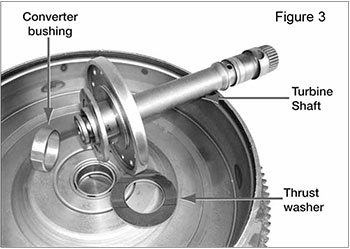 A converter restriction may occur from any of the components pictured in Figure 3. If a converter has restrictions, it reduces cooler flow when TCC is not applied. Monitoring cooler flow from Drive at idle, through the completion of lockup, is an effective method to isolate a converter restriction. Low flow until the TCC applies and a slow application or slip/shudder on apply indicate the release oil is restricted within the converter. Release oil is the pressure holding the TCC piston away from the cover. Once TCC is commanded, that release oil must exhaust around the switch valve spool (second spool from left in Figure 1) and
through the valve body separator plate to ensure TCC piston will hold. (We suggest you review Ed Lee’s article, titled 740/1740 Codes and Chrysler Converter Flow in the September issue of Transmission Digest. These articles are interrelated, with data and targets being the same.)
Valve Body Issue 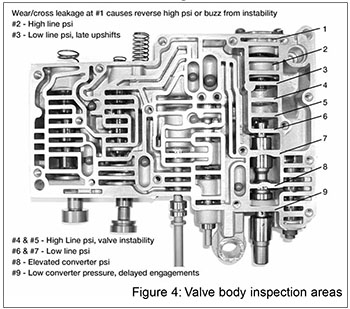 The valve body is the next ring of the target and can be affected by the previous cooler and converter restrictions mentioned. The pressure regulator valve supplies and maintains regulation for converter release oil and is also the source for what will become TCC apply pressure. With noise, high pressure or TCC slip issues, inspect the valve body for valve or bore wear at the arrows in
Figure 4.
Pump or Alignment
The pump and its alignment are the background for this target of information. The pump stator supports and aligns the turbine shaft with the center of the converter cover. On the opposite side of the cover bushing is the crankshaft pilot. The cover bushing centers the turbine shaft by way of the turbine hub, which controls the release oil flow. If this bushing or crank pilot is worn, the turbine shaft sealing rings may cross leak, which affects TCC apply and release oil.
Nice to Know
Additional “Nice to Know” information is at the outer ring. While not a requirement, this data supports the complaints. The chart in Figure 5 has converter release oil pressure recorded from seven different converters. Converter 2 has the most restriction to flow; while converter 5 has very little restriction. Note the release pressure in Reverse. This elevated pressure causes hydraulic noise in Drive or Reverse and reduces converter fill and TCC apply, which leads to the slip codes or shudder. The chart on sump pressure (Figure 6) is derived from pump inlet pressure/vacuum testing with the same converters. Note the two converters to the left (3 and 6). Both have built-in restrictions to the flow of release oil.