Give Them the Slip — Avoid Comebacks with Sonnax Slip Yokes

During transmission overhaul, it often becomes necessary to fix problems outside of the transmission 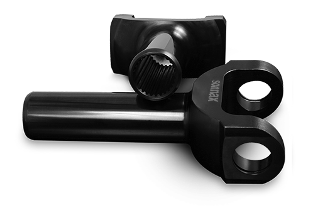 in order to ensure your customer gets maximum satisfaction out of your build. For instance, in rear-wheel drive models you may sometimes find it necessary to replace the slip yoke. This could be because of a failed yoke, or maybe the U-joint was thrashed and the yoke was so rusty that simple joint replacement was impossible. As far as slip yoke choice, there are quite a few, and they are not all equal in price or quality.

When the need for a new slip yoke comes around, it can be tempting to throw the least expensive yoke available at the problem. After all, most customers are not going to race around in their daily drivers, so it is clearly overkill to sell them on a yoke that was built solely for high speed or torque conditions. But often the poorly made, cheap yokes that glut the market can bring unintended problems, for both the customer and the shop’s reputation.

Imagine completing the perfect transmission rebuild. Everything went back together well and the original problem was addressed, but soon after delivery the customer returns with one of several possible concerns such as:

These are problems often associated with poorly made slip yokes. Manufacturing processes for slip yokes are quite different from one supplier to the next, so even though many look the same, they are not. It is imperative that a yoke have the following characteristics:

Because it is difficult to manufacture yokes with these characteristics, it is not surprising to find that many of the bargain-basement yokes on the market have impermissibly wide tolerance and often cause more problems than they solve. Yokes made this way place undue stress on the output shaft, seal, U-joint and driveshaft, not to mention excess stress on the yoke itself. This unnecessary and unplanned stress labors the components in a way they were not designed to work, rapidly fatiguing them and causing various failures. A well-built yoke avoids placing these stresses on the driveline, preventing excessive angles that cause premature wear and repeat joint failures.

It’s tempting to install a cheap yoke to trim cost during rebuild, but if that yoke induces NVH, your customer is unconcerned about the why; in their mind, it’s a shortcoming with the skills of the builder. As previously mentioned, it is very inexpensive to manufacture wide-tolerance pieces, so there are some cheap ones out there. But they are far more likely to cause problems, and most ruffled customers will tell you they prefer to spend a few more bucks up front to avoid a universal customer nightmare: bringing their vehicle back for a recheck.

Slip yokes from Sonnax are specifically designed to avoid these negative issues. The same characteristics that make them desirable for racing performance also make them a perfect fit for daily-driving grocery chasers. Using Sonnax slip yokes ensures the companion piece for your perfect build doesn’t end up spoiling all the hard work you invest in your reputation every day.

How to Choose the Right Slip Yoke