Automotive torque converters were first developed in the 1950s to function as a clutch for automatic transmissions. It worked as intended, but the use of ATF as a fluid connection between the engine output (impeller) and the transmission input shaft (turbine) was inherently inefficient, wasting both energy and fuel.

The energy crisis of the late 1970s drove OEMs to include a friction clutch in the torque converter to create a 1:1 mechanical link between the engine crankshaft and the transmission input shaft. This mechanical link, now known as lockup, meant OEMs also had to create a shock-absorbing device to isolate pulsations of engine cylinder firings from the rest of the drivetrain and protect other drivetrain components. These spring-loaded components we now call dampers cushion the shocks and — in today’s market — eliminate NVH (Noise, Vibration & Harshness), a major issue for optimal drivability.

These new lockup converters delivered the same fuel efficiency at cruising speeds as manual transmissions, but a new breed of customer — the performance enthusiast — changed the market once again. Enthusiasts in the 1980s started modifying engines, transmissions and torque converters to make higher levels of horsepower and torque at higher RPM ranges. They then needed torque converters with higher stall speeds to calibrate the launch and driving characteristics to match the added power.

Higher stall speeds are typically achieved with smaller diameter torque converters. With added torque, a stronger damper is needed to cushion the additional power. This posed a dilemma, because a stronger damper requires MORE radial space, not less, to accommodate the quantity and size of the necessary springs. The aftermarket rose to the challenge with a new type of converter that eliminated the damper completely, making room for a thicker, stronger solid piston lockup plate that easily could handle extra horsepower. These damperless converters became the go-to choice for upgrading enthusiast vehicles.

In diesel applications where large diameter converters reign supreme, a lower stall speed is typically desired and built into the OE converter, but even these can’t meet the performance expectations of today’s enthusiasts. The popular practice of “chipping” diesel engines creates lots of additional horsepower and torque that easily can overpower any damper that would fit in the core envelope. Damperless converter systems similar to those developed by the aftermarket for small diameter converters became a standard upgrade for the most radical diesel applications.

There are some unavoidable downsides to going damperless. In contrast to the cushioned, spring-loaded stock converters, drivers may feel the converter clutch both apply and release as they operate the vehicle. The experience can be jolting and will vary depending on (but not limited to) factors such as TCC computer control strategy, driving speed and throttle control. Because damperless converters create a solid link between the engine and transmission, there also is the problem of additional stress on other drivetrain components such as transmission shafts, gears, flex plates, driveshaft components, drive axles, and ring and pinions. In extreme applications where driving comfort and drivetrain durability are not the main concern, these are acceptable trade-offs for a powerhouse converter upgrade. For the everyday driver or casual performance enthusiast, they probably are not.

Whenever the application will support it, a lockup damper should be used in your rebuilt torque converter. If you determine that the vehicle’s power levels require a damperless torque converter clutch, be sure to educate customers about the pros and cons. Letting them know up front that driving comfort and drivetrain longevity will be negatively impacted can go a long way in preventing complaints and warranty returns later on. 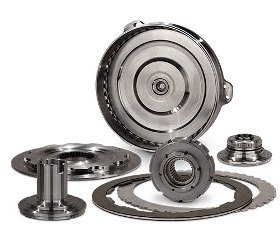 Buff Up Your Build with Sonnax Performance Converter Kits

Designed from the ground up to outperform OE and other aftermarket components, Sonnax has you covered with a full line of performance converter kits for gas and diesel vehicles.