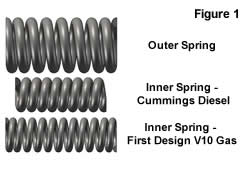 A 2001 Dodge Ram 2500 4x4, with a Cummins Diesel Engine and a 618 transmission, was brought to a transmission shop with a complaint of TCC shudder. Three to four months prior to coming to the shop, the customer noticed a change in the TCC apply feel. He said that the TCC apply had suddenly become more aggressive or abrupt. The condition had worsened over the course of three to four months, until the start of the shudder issue. The customer was retired and used the vehicle to tow his camping trailer around the country. He had several performance enhancements added to the engine, including an aftermarket turbo. Since the engine performance was enhanced for better towing capacity, he did not complain about the firmer TCC apply until it developed into a shudder.

Now the truck has returned to the shop with the shudder complaint. All of the usual preliminary checks were performed on the vehicle, including checking the line pressure and checking the cooler flow. Since all of the external checks were within the proper parameters, the problem was narrowed down to the converter. When the converter was cut apart, the TCC friction material was found to be degraded. The surface had been hot because of the shudder issue, but it also had the appearance of extreme use. The reason for the friction material failure was not immediately obvious. The turbine hub seal and the TCC piston bore were both in good condition. The reaction surface on the cover was also good. Other than the lining material, the only things that did not look good were the springs in the damper assembly. It was obvious that the damper springs were continually being bottomed out. The technician reasoned that the combination of the enhanced performance of the engine and the increased loads due to towing the camping trailer, were more than the capacity of the damper assembly.

This proved to be a good decision because, when the damper was replaced and the torque converter was reinstalled in the vehicle, the TCC apply returned to normal.

For this customer, replacing the correct application damper with a damper meant for another application was the best decision. This may not be the case with other customers; the dampers should be correctly identified and used in the proper applications.