4L80-E Overheating Due to Negative Clearance

Try to imagine the difficult job tech line technicians have. They are asked to decipher bits and pieces of information that may or may not be accurate and then come up with the correct answer. The information the technicians collected for the following two scenarios seemed to be as different as night and day. The information even originated in different countries. The amazing thing about these different complaints and symptoms was that they all had the same root cause. 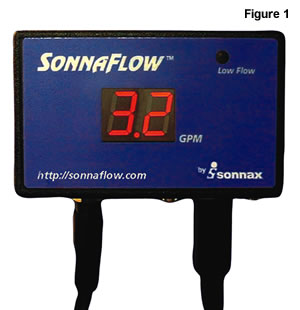 Vehicle #1 was a 1992 GM 3500 4 x 4 equipped with a utility body. The vehicle would not move forward and was towed to the shop. Upon tear down, the forward clutches were found to be completely burned up, and a complete overhaul including a rebuilt torque converter was recommended. The customer approved the overhaul and requested a temperature gauge be installed at the same time. The repair seemed to be progressing routinely until the R&R technician noticed that the temperature gauge had climbed to 190°F while the vehicle was still on the lift. At first the gauge was thought to be defective, but a replacement gauge showed the same temperature. The technician suspected a restricted cooler and a flow monitoring device was installed before the vehicle was road tested. On the shop's usual 6-mile test loop, the vehicle had a good cooler flow rate of 3.2 gallons per minute (G.P.M.), but reached transmission temperatures in excess of 285°F (Figure 1).

The only time the temperature would go down was on a downhill coast, but that was only a 15 to 20 degree drop. The technician even burned his hand when he was removing the flow monitoring device. After an external cooler was added, the temperature was about 20°F cooler, but was still considered excessive at 265°F. At this point the converter was removed for evaluation. 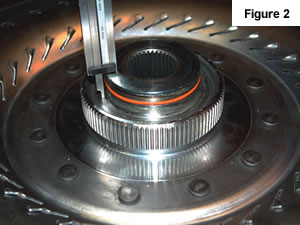 The second scenario involved two GM vehicles. One vehicle was a 2004 2500 series equipped with a 6.0L engine. The second vehicle was a 3500 series cube van equipped with the same size engine. The vehicles had 164,000 and 178,000 kilometers respectively. Both vehicles had their 4L80-E transmissions overhauled and their converters replaced with remanufactured units, and both vehicles were returned later because of 740 codes. When scan tools were placed on the vehicles, they recorded TCC slip rates of 50 to 80 RPM under normal driving conditions. When any additional load was placed on the vehicles, such as hilly terrain or towing, the slip rates would climb to over 250 RPM. The converters were removed for evaluation after the normal in-vehicle checks, which included cooler flow measurement, yielded satisfactory results. 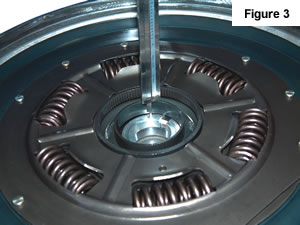 How is a "negative clearance" possible? In this design, a clutch release clearance target of .030" to .035" (the piston travel from full apply to full release) is adjusted separately from the end-play. Clutch release clearance is calculated based on two dimensions. Dimension A is the distance between the leading edge of the turbine hub and the surface the piston will rest on when it is in the fully released position (Figure 2). Dimension B is the distance between the lockup piston seal bore edge and the front thrust washer (Figure 3). This represents the piston's location in the fully applied position.

What caused the overheating and 740 codes? Inadequate clearance prevented sufficient fluid flow between the cover and piston while in the release position. The overheating converter in the first vehicle simply could not pass enough fluid internally, and the temperature gauge showed it.

Inadequate clearance took its toll on the 740 code converters as well. Inadequate fluid flow and dragging of the clutch material while in the release mode deteriorated the lining to the point that it could no longer function properly during apply.

The diagnostic information provided for these vehicles was different because the technicians used different diagnostic tools. Vehicle #1 was diagnosed with the help of a temperature gauge and a flow monitoring device. In this case, a catastrophic failure was averted without ever knowing that the converter had a higher-than-normal slip rate. Vehicles #2 and #3 were diagnosed with the help of a scan tool. Catastrophic failures were averted in these cases, without the knowledge that the transmissions were oveheating. After all three converters were replaced with converters with the correct clutch release clearance, the temperature of vehicle #1 never went higher than 150°F, and the slip rates on the other two vehicles returned to normal.