A Clutch Call: What 740/1740 Codes can Reveal about Chrysler Converter Flow

740/1740 codes tell you there is excessive slip at the TCC clutch. The engine and transmission output RPMs are constantly being monitored. You can compare the difference in the two RPM rates to determine transmission slip. If the RPM 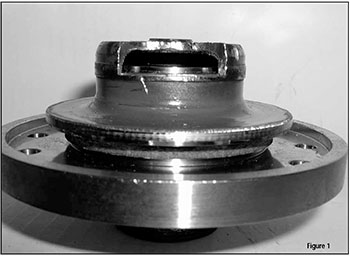 Sometimes the reason for the 740 code is not found within the transmission or torque converter. A restricted cooler or line is a good example. Using a fluid without the correct viscosity (the wrong fluid) may cause a 740 code. The hydraulic integrity of the valve body (worn bores) and the pump (excessive clearance or cross leaks) are two possible culprits that must also be eliminated. If all of these possibilities check out OK, it’s time to take a closer look at the torque converter.

Converter charge oil enters the converter through the input (turbine) shaft. When this oil exits the end of the input shaft, its path around the splines (between the shaft and turbine hub) is blocked by a seal. The only remaining path is through the grooves on the outside of the turbine hub bushing. The oil then passes between the turbine hub and cover, fills the area in front of the lockup piston, and eventually spills around its outside edge, where it continues to fill the rest of the converter before exiting as lube oil. 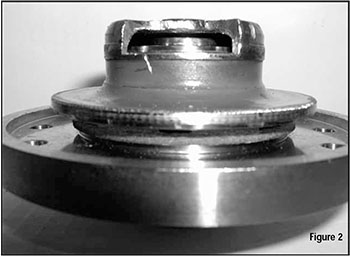 When the input (turbine) shaft is in its proper position in relation to the inside of the pilot (cover), it will look like the cut-away in Figure 1. The input shaft is about .125” away from the cover when the converter is installed to its proper depth. The proper way to check converter-to-flex-plate clearance is to push the converter back until the hub bottoms in the pump, then measure the distance between the flex plate and the converter pad. This measurement needs to be a minimum of .125”, but no more than .250”. The minimum of .125” is important to allow for a certain amount of converter expansion (ballooning), and to allow for a certain amount of movement by the flex plate. If the flex plate is bent, it could allow the converter to move rearward and restrict the flow of oil between the input shaft and cover. The example shown in Figure 2 was close enough to cause a 740 code.

The 518 and 604 converters are first cousins, hydraulically speaking. They share many of the same flow characteristics and several of the same problems. 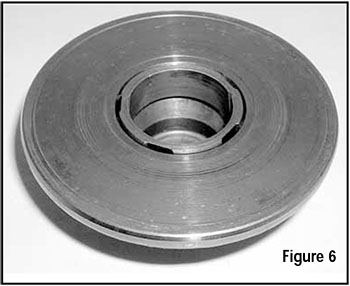 to the position of the bushing. Since the inner race of the OEM bearing is only .015" below the thrust surface of the outer race (see Figure 4), it may come into contact with the bushing if the bushing is up .020” above flush as shown in Figure 5. The .005" of wear shown in Figure 6 is the result of that contact. This is a bad thing for two reasons: First, the material from the bushing that was worn away by the bearing race has to pass through the bearing, and secondly, the pinpoint contact of the TCC piston and turbine increases, the chances of a spring walking out of place also increases. A small amount of extra clutch release clearance will only allow the spring to walk up the turbine enough to push the clutch forward, making it drag on the cover. A larger amount of clearance will allow the spring to come completely out of the piston’s spring retainer, causing catastrophic results.

Checking Chrysler’s clutch release clearance is time-consuming at best, and some rebuilders are relying on the “use thicker friction material and hope” method. Making sure that the turbine hub bushing is not creating extra clearance may help to eliminate some problems.