Read Parts 1 and 2 of "Orifice Control Within the Converter"

Orifice Control Within the Converter Parts 1 and 2 briefly touched on the secondary oil paths through TCC pistons, turbines, and stator caps. This final article will cover regulation and possible restrictions of converter charge/TCC release oil flow.

The secondary path of the charge/TCC release oil is regulated to some degree by transmission parts which are located within the confines of the converter. In some units, the charge oil is regulated by the orifice created between the raised area on the stator shaft (or support) and the impeller hub. In other units, it is regulated by restricting the flow of oil through or around the input shaft bushing mounted inside the stator support. The Allison 500 series is a unique example because it uses both methods to regulate oil flow, as it enters and exits the converter.

Some transmissions have a separate torque converter regulator valve that works in conjunction with the main pressure regulator valve. The Borg Warner transmissions (T-35 Model 12 and FMX) are early examples of this design where the valve was used to control the flow and regulate the pressure at about 40 PSI.

Inside the converter, the path of the charge/TCC release oil needs to be as free of restrictions as possible. In lockup converters, except those using a clutch pack type lockup system, the most popular path for charge oil is through the input shaft, then crossing in front of the TC clutch. Possibilities for flow restrictions will vary depending on the stack up of the converter. Lockup converters that stack up without the turbine hub contacting the cover only have to worry about insufficient clutch release clearance as a possible restriction. (For more information, see the article, "4R100 Flow Issues".)

Converters that stack up with the turbine hub contacting the cover have several possible areas where restriction can occur. The thrust washers or bearings that separate turbine hubs and covers are one possible area. For example the bearings in FWD Chrysler converters are designed to pass oil, while bearings in RWD Chryslers are not designed to flow oil and may cause a restriction (Figure 1).

If the bearing or thrust washer restricts the flow of TCC release oil crossing between the piston and cover, make certain that a secondary path is available. Grooves in the cover (i.e. Cummins) or passages through the turbine hub (i.e. 5R110W) will both work (Figure 3). (For more information, see the article "740/1740 Codes and Chrysler Converter Oil Flow".)

Testing conducted with ATF at 180° F at 80 PSI has shown that the flow rate of the release oil passing between the lockup clutch and the cover should be at least 4.5 gallons per minute. 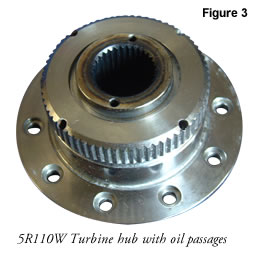 The impeller is a much larger pump than the transmission's pump. In domestic vehicles the smallest impeller is an 8" found in Opels. Other domestic vehicle impellers can be as large as 13", and those in many commercial vehicles are much larger. It is easy to understand the larger secondary flow within the converter when you realize that the converter impeller is capable of pumping many times more oil than the transmission pump.

A Clutch Call: What 740/1740 Codes can Reveal about Chrysler Converter Flow