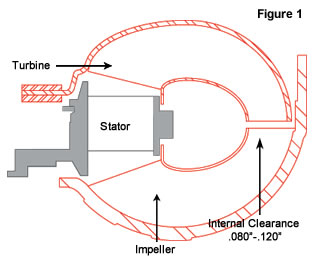 Sometimes misunderstood, and often overlooked, but very important! "Internal clearance" is the space between the impeller and the turbine in an assembled torque converter (Figure 1). Hydraulically, it is the distance that the oil travels from where it exits the vanes of the impeller to where it enters the vanes of the turbine. Some rebuilders use the term "internal clearance" incorrectly. They use it to refer to the clearance between the internally stacked components of the converter. The correct term for the clearance between the stacked components is "end play".

In a perfect world, the converter would operate at its maximum efficiency when the impeller and turbine are as close as possible, without touching. In the real world, where nothing is perfectly straight or true, some extra clearance is necessary to prevent contact between the moving parts. This extra clearance also builds in some planned inefficiency, which allows the transmission to remain in gear without stalling the engine when the vehicle is stopped. Most 10" to 12" diameter converters will operate efficiently with about .080" to .100" of internal clearance. Larger converters need a little more clearance to keep the parts from touching.

There are some very obvious and some not so obvious by-products of having too much internal clearance.

A Not So Obvious Example 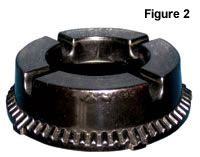 How to Easily Check Endplays in Chrysler RFE Transmissions