In Parts 1 and 2 we looked at the results of chassis dyno testing conducted on torque converter modifications by Sean Boyle’s students in the automatic transmission course at Southern Illinois University. The testing was done on a MD-250 Mustang chassis dyno, and the test vehicle was a stock 2000 Dodge Durango RT 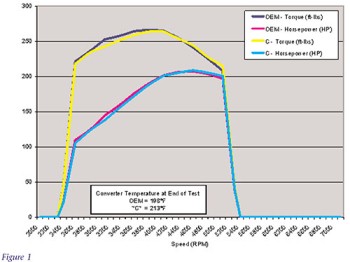 equipped with a 5.9L gas engine and a 46RE transmission.

The next converter to be evaluated was converter “C.” Converter “C” retained the stock 144K factor stator. The only modification to converter “C” was to the internal clearance. The .080” OEM clearance between the impeller and turbine was increased to .160”. 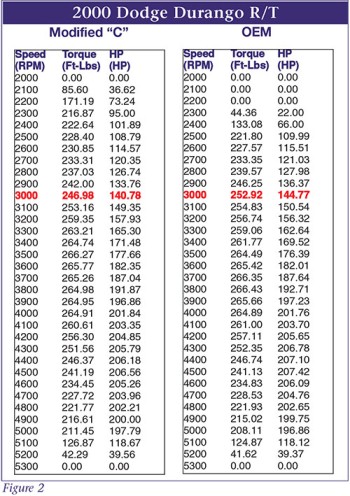 This modification is popular on performance converters to increase the stall. Since the wideopen throttle horsepower test was the only one used for evaluating purposes, no measurable increase in stall could be seen with this modification. If you look at the overlay graph of the original converter vs. converter “C” in Figure 1 and the line-by-line comparison in Figure 2, you will notice some distinct differences. The torque and horsepower values started higher with the OEM converter and continued to climb to 4400 RPM. Both converters had their peak performance at the 3800 RPM break, but the greatest difference in performance occurred at 3000 RPM. 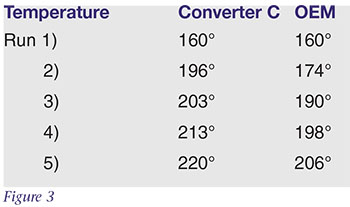 ​​​​​​​On the negative side, converter “C” had the largest rise in temperature of any converter tested to this time (see Figure 3).
This trade off is significant and would limit this modification to 1/8 and 1/4 mile performance applications. This modification also, usually requires some form of additional cooling.
As you can see with converter ”C,” some of the trade offs are more significant than others. Consider the intended use of the vehicle and how a trade-off may affect or limit its use. You want your customer to be happy.
Special thanks to Sean Boyle and students Zack Emberto, Ross Rohlman and Luke Davis at Southern Illinois University for their technical assistance with this article.
Ed Lee is a Sonnax Technical Specialist who writes on issues of interest to torque converter rebuilders. Sonnax supports the Torque Converter Rebuilders Association.