Friction material properties and quality are often discussed and debated, but how often are they really understood? A good grasp on some important terms makes all the difference:
Know What Matters

The terms above have one thing in common: they are all well-established physical properties by which any piece of friction material can be analyzed and evaluated.

What matters? Which is of greatest importance? That depends on how you intend to use the friction material. For example, in a straight on or off lockup system, static coefficient and shear strength would surely top the list, and thermal capacity and porosity may be on the lower end of importance. As you move further toward a system designed to slip continuously, static coefficient and shear strength become less important considerations compared to thermal capacity and porosity.

In general, these are the levels of importance within the three general lockup categories:

Once you know what properties are important, how do you select the right friction material? The charts below represent a comparative analysis of a variety of BorgWarner friction material offerings (HTE, HTS, HTL and XTL), along with analysis of materials offered by a major competitive brand (T, K, HC, PT). The superior materials offered by BorgWarner – used appropriately based on application criteria – will consistently provide you with the best quality lining for your torque converter rebuilds. 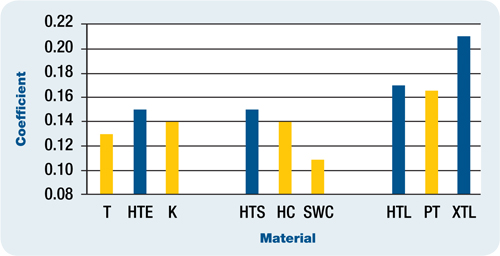 A higher static coefficient is better. This characteristic is a primary consideration in On-Off lockup systems. 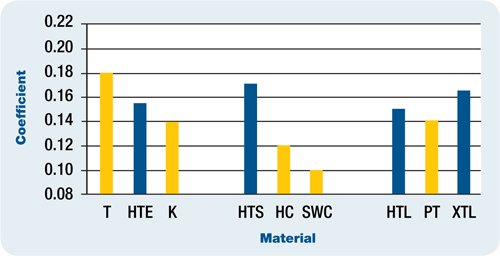 When a system is fully locked up, a higher rating means the material can withstand more force before it shears internally.

The higher the rating, the more lubrication is available to reduce heat. This quality is critical in systems designed to slip.