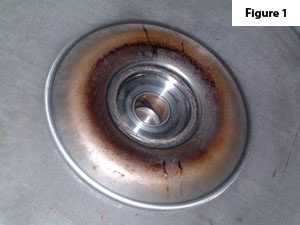 In the February 2010 Transmission Digest article titled "Honda 740 Codes: Torque Converter Forensics" you learned that insufficient clearance between the TCC piston and cover bearing could cause less TCC piston clamping force and damage to the cover. Most lockup converters have about .080" to .090" clearance between the piston and cover in this area to prevent contact when the piston deflects during TCC apply. On some Honda converters this clearance is as little as .045". Any machining of the piston or reaction surface of the cover makes this clearance even less, but even normal friction material wear can reduce the clearance to dangerous levels.

The normal hydraulic forces within the torque converter push the TCC piston toward the cover; the TCC piston reacts like a "normally on" pressure switch. It is normally pushed to the apply position and is only released when the flow of TCC release/charge oil between the piston and cover floats the piston off the cover.

In the September 2011 Transmission Digest article titled "Overheated Honda Converters/740 Codes" you learned that, under certain conditions, the flow of TCC release/charge oil is low enough to allow the TCC piston to drag on the cover. When the TCC piston is dragging on the cover, heat is being generated and friction material wear is accelerated, leading to the 740 code. One area of secondary damage to the overheated converters occurs when the TCC piston contacts the outer race of the bearing that rests in the cover. The wear marks and the amount of heat generated can be seen in Figure 1.

Since the turbine hub rides against this bearing, the overall height and clutch release clearance of the converter are affected by the wear. If the converter was rebuilt without any modifications, the proper clutch release clearance of .030" to .035"could not be achieved. Many shops have found that when the cover is worn to this extent, the required machine work is too expensive to salvage the cover. 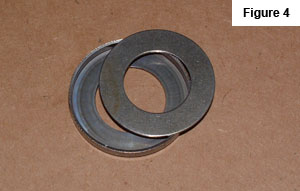 Fortunately, there is an inexpensive alternative to the costly machine work. The .039" thick flat bearing race Sonnax part number MI-N-2, which is used with the three-piece replacement bearing, will fit nicely into the OE cupped bearing race. (Figure 4)

Normally you cannot put a bearing race/shim in this position because of piloting issues. In this case, it is possible because the OE bearing race cup is deep enough to pilot the replacement race shim and the rest of the bearing. The extra .039" thickness of the race/shim makes it possible to get the correct clutch release clearance and overall height even with the worn cover. 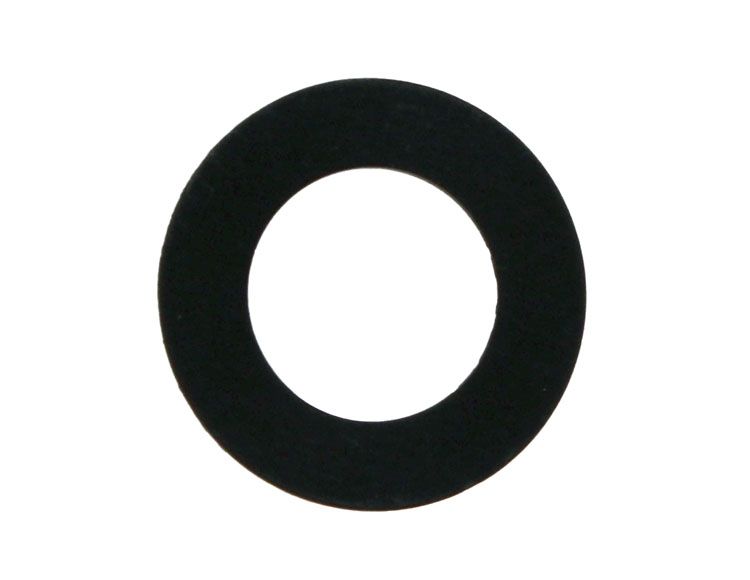