The rebuilding of the transmission and torque converter seemed to proceed routinely, and after a successful road test the vehicle was returned to the customer. About two weeks later the customer returned the vehicle with a P0741 code. The technician who had originally performed the work on the vehicle was on vacation so the vehicle was checked by the shop owner. The shop owner remembered having a similar problem with another vehicle that turned out to be a defective TCC solenoid, so he replaced the solenoid as a safeguard. He kept the vehicle for a couple of days, but was not able to duplicate the problem. Two weeks later the vehicle again returned to the shop with the same 741 code. The technician initially thought that the differential may have been replaced with the wrong ratio. He remembered the original differential had a sun gear with 42 teeth, and when he checked the replacement he found that it also had 42 teeth. He then turned his attention to a possible leak in the TCC circuit. A wet air test showed that the AFL and TCC control valves did show signs of leaks. The AFL, TCC control, and TCC regulator valves were replaced. The torque converter was also replaced with another rebuilt unit.

At 65% duty cycle, the slip rate went from 650-700 RPM to 400-500 RPM. Although the TCC slip rate did improve after replacing the valves and converter it was still high enough to cause the 741 code.

The transmission was again removed from the vehicle and placed on the bench. The technician remembered robbing the drive sprocket support from a 4T60-E transmission. He checked with his hard part supplier to make sure that the 4T60-E and 4T65-E sprocket supports had the same part number. When he found out that the part numbers were different he was sure that he had solved the problem.

Mike Souza from ATSG wrote a great article (Transmission Digest April 2008) explaining this problem. The technician used the article as a reference to prove that this was causing the P0741 code, but when he applied air pressure to the TCC apply port on the 4T65-E turbine shaft (Figure 1), he got a full stream of air out of the TCC apply port on the 4T60-E drive sprocket support. At that point he was no longer sure that he had found the problem.

There is enough clearance between the 4T60-E drive sprocket support and the 4T65-E turbine shaft to allow enough flow to pass an air check. The customer did not drive in any hilly areas and did not carry any passengers, so the lockup apply pressure demand was low. In this situation there was sufficient oil flow most of the time and the vehicle would only set a code every week or two.

The figures below illustrate the flow area difference created by the two different supports. Figure 2 shows a small amount of plumbers putty placed on the 4T65-E turbine shaft before it was inserted into a 4T60-E drive sprocket support. The putty is being used like Plastigauge® to visually demonstrate the different clearances. Figure 3 shows the putty compressed or removed by the support. Notice how much more putty remains after the same shaft with new putty was inserted into the 4T65-E support (Figure 4). 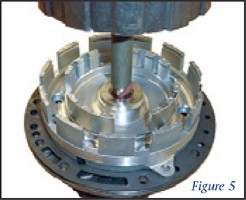 A 2001 Volvo equipped with a 1.9L engine and 55-50SN transmission was brought to a transmission shop. The customer complaint was fluid leaking out of the front of the transmission. The vehicle had high mileage but performed very well. This was a typical soft part overhaul and torque converter rebuild. The only hard part that was replaced was the pump. On the road test there was no lockup and a P0740 code was set. Of course the converter came under suspicion immediately, but it was hard to ignore the fact that replacing the pump was the only change made to the unit. The replacement pump was found to be the reason for the 740 code. There are two different diameter input shafts, .844" and .870", and two different pumps with stator bushings to mate to the shafts. Figure 5 shows a piece of gasket material fitted into the overly large clearance that results when a small shaft is used in the large pump bushing.

Seasoned transmission technicians will remember similar problems with worn bushings or incorrect turbine shaft rings on the TH125C transmissions. The part of the TCC apply circuit that caused problems in the early 1980’s is still important today.

Transmission Digest had a TECH TIP about this problem written by Hardparts for Transmissions in the June 2006 issue, and ATSG covered it in their red seminar book in 2007. Today most hard part suppliers ask for specific applications for this part or at least the dimensions of the shaft or stator bushings.

The four vehicles in "Don't Blame the Torque Converter" all had TCC related trouble codes: 770, 741, or 740. With the exception of the Volvo, each vehicle had the converter replaced at least one time, and in every case the converter was blamed but found to be not guilty.

Special thanks to Paul Tinges from Hardparts For Transmissions and ATSG for their technical assistance with this article.