Part One of a Two-Part Series

Society often influences us to try to blame others for our problems. From an early age we try to place blame with friends or siblings. Our training usually continues into our school age when the guilty person is always “the other guy”. It seems only natural for this mind set to continue into the work place. This is especially true if your work place happens to be with the automatic transmission industry. The mysterious inside of a sealed torque converter is easily substituted for the “big dumb kid” in the back of the classroom. The following are examples of a torque converter being unjustly blamed for a transmission problem. 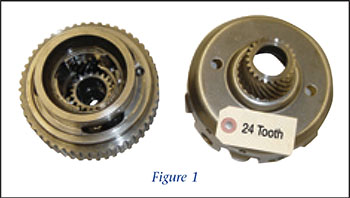 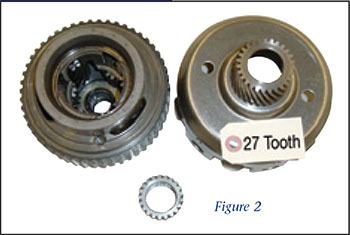 The torque converter was sent to the Kalakua Converter Company where it was rebuilt. The converter looked good inside except for the metal contamination.

The rebuilt transmission and torque converter were reinstalled into the vehicle. The vehicle was successfully road tested and returned to the customer. The vehicle worked fine while it was cold; however the customer noticed that after the vehicle was warmed up the check engine light would come on. (Keep in mind that this is happening on an island where there are no long journeys.) 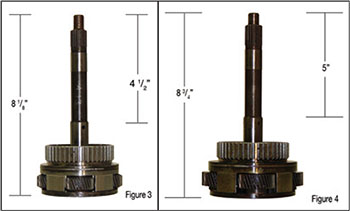 When the vehicle was returned to the transmission shop a scan check showed that the trouble code was P0770. Since the OD planet was the only hard part that was replaced, and there are (2) different OD ratios available for the 340 transmission, the technician reasoned that the wrong ratio may have been installed. When the technician tried to prove his theory by counting the teeth on the OD sun gear, he found that the original OD planetary gear set had been thrown away. The technician decided to use another method to prove his theory. He road tested the vehicle, but he did not allow the vehicle to shift into the OD range. If the computer commanded lock-up and a code was not set when the transmission was in the (3) or (Drive) range, he would know that the OD ratio was incorrect. He found that the TCC code was set even with the OD inhibited. This convinced the technician that the problem was inside the converter. To further prove his new theory he decided to control the TCC solenoid himself. Since the TCC solenoid is grounded at the value body, all he had to do was supply his own 12 volt signal to the solenoid. Being able to control TCC and observe results, he now noticed that the engine would only drop 160 RPM when the solenoid was engaged. Remembering that prior to the first rebuild, the TCC clutch would causes the engine to stall when it was blocked in the apply mode, he reasoned that the TCC did not have enough clamping force (some type of internal leak). The converter was removed from the vehicle and returned to the converter shop. When Justin Kawasugi, the owner of the Kaslakua Converter Company, opened the converter there was nothing wrong inside. Justin knew that the OD planet had been replaced and also knew that the input shaft was an integral part of the OD planet. He decided to check the OD planet to see if there was some type of flow difference with the replacement input shaft. What Justin did find was that the replacement OD planetary was 5/8" shorter than the original. The tip of the input shaft was just making contact with the seal in the turbine hub; No wonder full clamping force could not be attained. Multiple ratios are not the only differences in the OD planets used in the 340 transmissions. Some ratios are also available in more than one length. The 4 cylinder OD planet measures 8 1⁄8" long (Figure 3) and the V6 and V8 OD planets measure 8 3⁄4" long (Figure 4).

In this situation, putting the 4 cylinder planetary into the V8 transmission had caused the problem. Once again, the converter was not to blame.

Check out Part 2 of this two-part series: Don't Blame the Torque Converter - Part 2
Special thanks to Justin Kawasugi from the Kalakaua Converter Co. in Hawaii for finding the problem with the 2002 Tundra. Special thanks to Paul Tinges from HFT Hardparts For Transmissions in Mt. Laurel, N.J. for his technical assistance and pictures in this article.