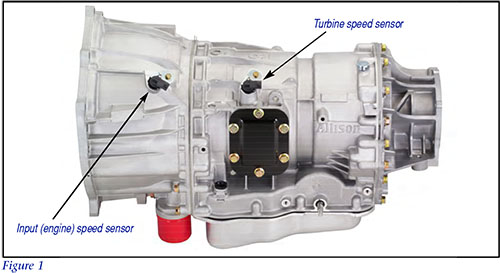 Have you ever found yourself chasing a “phantom” TCC driveability problem in a GM vehicle that uses the Allison 1000/2000/2400 series of transmissions (Early or Late)?

If you have, there’s a good chance that the root of your problem turned out to be the torque converter. No earth shattering news there, but what is unique is that the problem was likely on the outside of the converter, not the inside.

Here’s a case in point. A 2001 2WD Chevrolet 1500 with a 6.6L diesel engine and an Allison 1000 transmission was returned to a transmission shop. The transmission had been overhauled recently and the customer’s complaint was a cycling TCC, or what he described as a lockup surge. A scan check of the vehicle found no codes. The PCM would command the TCC solenoid off at regular intervals. The vehicle’s tachometer remained steady, but the live data on the scan tool showed a small repeating spike in the engine rpm. The pickup for the engine rpm sensor is the input speed sensor located in the bell housing of the transmission and is excited by the row of dimples on the torque converter closest to the engine.

It turned out that one of the dimples on the outside of the converter was partially flattened by a handling mishap and was causing the rpm glitch. Replacing the converter fixed the problem.

In a similar incident, a 2001 Chevrolet 2500HD pickup was returned to a transmission shop with the same lockup surge complaint. Again, there were no codes. The PCM would command the PWM solenoid to ramp up to about 60% and then would turn the TCC solenoid off. It would then repeat the cycle. A movie snapshot of the engine rpm showed an evenly spaced 150 rpm spike. On this vehicle, the engine rpm glitch was caused by a drain plug that the converter rebuilder had added between two of the dimples in the row of exciter dimples. 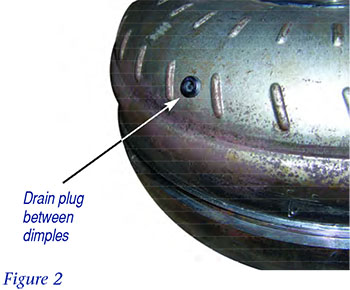 A lockup surge was reported in yet another vehicle. In this case the surge was not as frequent or pronounced as the other two. There were no codes present and the lockup problem was originally diagnosed as an engine miss. The problem was finally found when a movie of the engine rpm showed a glitch. This time the glitch was caused by two small balance weights that had been added to the cover where it meets the impeller.

Torque converter rebuilders will have to modify their handling practices with the Allison 1000 cores. Small imperfections in the dimples that excite the speed sensors may now require removing the converter. Impeller run-out will also have to be monitored more closely. Most rpm sensors have working clearances in the .030” range.

We have all seen the small creases that can be found on many impellers. These creases originate when the plate steel passes over rollers on its way to becoming a roll of steel. Until recently these small creases had no negative effects on the functioning of a torque converter. But now, even these small creases cannot be tolerated on Allison 1000 converters.

The input speed sensor in the bell housing will be discontinued in 2007. It should be safe to assume that the converters will interchange without problem, but only time will tell.