A doctor takes his car to a mechanic and complains "Your fee is more per hour then we get for medical care." "Yeah doc," the mechanic replies, "But your models haven't changed since Adam and Eve, and we have to stay up-to-date with new models coming out every month."

How true is that! It seems that no sooner have we wrapped our heads around how the "new" model or component functions than we find them taking a backseat to something even "newer." As Bob Dylan sang in 1964, "…for the times they are a-changin'." That was the same year that Ford introduced their C-4 Cruise-O-Matic with one of the industry's first aluminum cases, and when rebuild prices and financing were much different than today.

In the automatic transmission industry, huge changes have occurred over the past 40 years and now seem to be happening at an ever-increasing rate. To stay in business and be profitable, it's critical to acknowledge and understand these new technologies. Benjamin Franklin said it best: "When you've finished changing, you're finished." In other words, those who don't adapt to and adopt change will limit their potential and soon be shutting their doors for good.

In the mid-to-late-1980s, transmissions started incorporating electronics, first with simple pressure switches, then on-off solenoids, computers and various sensors. More recently, Pulse-Width Modulated (PWM) type solenoids were introduced in some applications so that pressures could be modulated. Now, many of these PWM solenoids are being updated to linear solenoids for pressure control.

Most "newer" components have advantages and disadvantages over the previous design, so let's take a closer look at PWM and linear solenoids to understand the functional changes that have occurred over the years and how those changes impact your rebuild procedures. 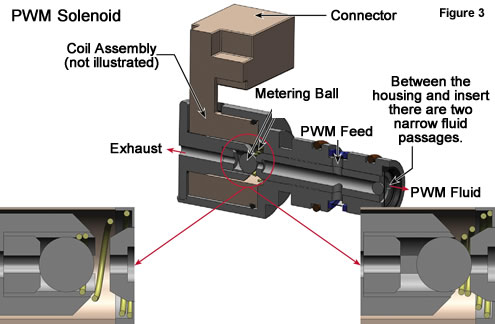 A typical PWM solenoid is essentially an electronic pressure regulator valve (Figure 3). The solenoid shown below from a 4T60-E is used to convert PWM feed (line pressure) into the PWM signal used to control converter clutch apply pressure. This is accomplished by the following process:

The ratio of on/off signal time at the solenoid is referred to as the duty cycle and ranges from 0 to 100%. This ratio of on-time during a cycle (in this case, 1/32 of a second) controls the leakage and alters the pressure. Pressure is inversely proportional to duty cycle. When fully energized, or 100% duty cycle, PWM pressure is at a minimum, resulting in minimum converter clutch apply pressure. When the normally open solenoid is at 0% duty cycle, full PWM feed (line) pressure flows through the solenoid and strokes the converter clutch regulator to allow maximum converter apply pressure. The duty cycle often is between these two extreme percentages, as the computer continuously monitors vehicle speed, gear range, throttle angle and other parameters to adjust the duty cycle and allow a controlled slip apply or release of the converter clutch. 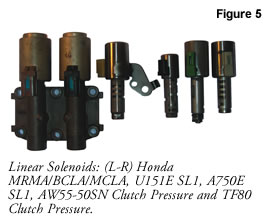 It also should be noted that – with the new transmissions – the design of the solenoids is getting smaller. Not only does this provide weight and space savings for the valve body, but manufacturing costs are reduced as well. Most of the control valves are being designed smaller and switched from steel to aluminum to make them much more reactive and capable of effective operation at higher signal frequencies. Making the snout and the valve out of similar materials also allows for the same hydraulic clearance at variable temperatures, which provides better response time and reliability.

Understanding how something works is often the first step in knowing how to diagnose a malfunction. Linear solenoids tend to be more expensive than the simple PWM solenoids, so the choice of whether to re-use, rebuild or replace these parts needs to be made. There is no universally right or wrong decision. Ultimately, you will balance the needs of your customer, the cost of your time and your warranty structure and costs. Because the PWM and linear solenoids operate the same electrically, standard techniques can be used for both to determine electrical integrity. With the addition of the hydraulic spool and valve portion of linear solenoids, however, additional areas for failure need to be checked.

Check for Damage at the Cast Snout Flange & Plastic Connector

A quick check of the cast snout flange and the plastic connector should always be at the top of the list, as these areas tend to crack and break during the handling and shipping of valve bodies (Figure 6). Like other valve locations, the integrity of the bore-to-spool clearance is critical in maintaining the proper hydraulic sealing in order to maintain pressures. Visual wear can be seen in some instances, and some solenoids are designed so that the valve and spring can be removed for better inspection. Care should be taken in disassembly, though, as the snout end cap is sometimes designed as a tunable component for setting specific pressures at the factory during assembly.

Taking measurements and/or marking the solenoid prior to disassembly is a must for ensuring proper recalibration. Using the valve body as the manifold and performing a vacuum test on the solenoid spool valve is a quick way to determine hydraulic integrity. Keep in mind that the integrity of the snout to valve body casting interface also is being tested, so vacuum numbers may be lower than a typical valve-to-bore check.

Other components of the linear solenoid subject to wear or damage include the plunger, bushings and washer, but these cannot be seen and examined without taking the solenoid apart. There are aftermarket tools available that allow you to open and re-crimp the solenoid/snout to inspect these components and clean debris from the solenoid. Companies also are now entering the aftermarket with rebuilt and tested solenoids as well as newly designed replacement solenoids. 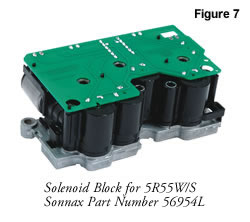 Not only is solenoid functionality changing, but their valve body integration method is evolving as well. Typically solenoids have been held in the valve body casting by a mechanical retainer, often at the outer bore of the valve that it was actuating. But in some of the newer transmissions (6L80-E, 6T70, 6F50, 5R55N/S/W, 42RLE, 45/68RFE, 62TE) we are seeing most, if not all, of the solenoids being bundled together into their own module (Figure 7). Whether OEM calls it a solenoid body, block or pack, this module is then bolted onto the valve body. In most instances, other pressure switches and sensors also are incorporated into these solenoid modules.

From a factory standpoint, the modular design provides many advantages over the use and assembly of solenoids as single components: 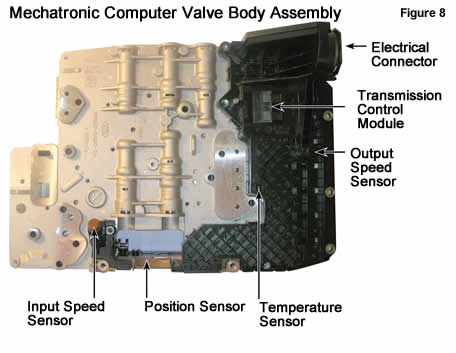 While this module design is great for the OEMs, it can be daunting from a rebuilder standpoint. Gone are the days of replacing individual solenoids or sensors due to failure. Modular solenoid blocks must be replaced as a unit, even if only one of the components has failed – a pricey proposition. As often happens when challenges arise, though, this has opened the doors for ingenuity. Companies are developing methods for rebuilding these solenoid blocks and filling a need in the aftermarket.

The likes of ZF (ZF6HP19/26/32 series, 6R60) and Jatco (RE5R05A) have taken the module approach one step further: they have incorporated all of the benefits of the solenoid/actuator module and combined the computer and the valve body into one assembly (Figure 8). Known as a "mechatronic" unit, this design provides yet another level of cost savings for the factory, both in manufacturability and testing:

All of these factory benefits from mechatronic units create new headaches (and opportunities) for the aftermarket. As with the ZF 6-speeds, since the computer is calibrated to the vehicle, swapping out an entire mechatronic unit for a used core will not work. Some manufacturers permanently mount the computer to the valve body. The ZF design allows you to separate them, making it possible for the valve body portion (hydraulic and mechanical functions) to be changed or rebuilt as long as the base type (19/21/26/28/32/34) remains the same, but the computer needs to stay with the vehicle. Thankfully the ZF computer portion of the mechatronic is easily removable and fairly durable, but handle with care! Electrostatic discharge can leave you with a very expensive paperweight.

Reading into the tea leaves of these transmission changes, it seems the future is going to hold a lot more electronics, modular components and international designs that can be made to fit different vehicles with slight changes. All this leads to transmissions tuned for specific vehicles at the factory. Does this make our job more difficult? You bet! But with change comes opportunity, and what you want to make of that charts your own destiny.

So who knew that Bob Dylan was transmissionally clairvoyant back in the '60s when he sang, "If your time to you is worth savin', then you better start swimming, or you'll sink like a stone, for the times they are a-changin'." Or, if you prefer a more modern song and upbeat attitude, put on some Sheryl Crow, 'cause: "a change will do you good." So, I guess, "The only thing that stays the same is change." Wait, I've got more…