Read Part 1 of "Orifice Control Within the Converter"

Most torque converter rebuilders understand how oil flow within the converter harnesses engine torque and helps drive the vehicle. Unfortunately, many rebuilders have little knowledge of the many secondary paths and functions of converter oil flow.

Last month's article, "Orifice Control within the Converter, Part 1" touched on two secondary oil paths. The first was the oil that bypasses the lockup clutch and the second was the balance oil that is allowed to pass through the turbine.

Rebuilders have many questions about some of the other secondary oil paths. Here are a few of the questions and their answers.

Why Do Stator Caps and Bearing Adapters Have Passages for Oil Flow?

Figure 1 shows two common oil passage configureations. This is one of the least understood secondary oil paths in the converter. To better understand the effects of this oil flow, some primitive tests were set up. For test purposes, a baseline comparison was established by flowing oil through the passageways of stator caps with different passageway designs. The test used ATF at 80 psi, at a temperature of 180°F. The rate of oil flow through each cap was recorded, to be used later to compare performance. The caps were then installed into vehicles and road tests were conducted. At first, it appeared as if the oil passages had little or no effect on the performance of the vehicle. Then, one of the R & R men noticed that more than normal heat was coming off one of the converters that had been equipped with a stator cap previously recorded as having comparatively low flow. He could actually feel the heat radiating from the converter while the vehicle was still on his lift. When pyrometers were added to the cooler lines, the difference was very dramatic. The flow capacity of the oil passages in the caps had a direct effect on the working temperature of the converter.

What was learned from the test was that optimum converter operating temperature could be attained when the passageways in the cap were capable of flowing 30 to 32 gallons per minute (GPM). It was also learned that the lower the flow rate, the higher the temperature of the converter. When the flow rate through the passageways in the stator caps dipped below 10 GPM, the temperatures became extreme. Keep this in mind when you are making a bearing adapter for a performance converter. Cross drilling four 3/16" holes through the cap will help the oil circulate through this secondary path. Remember that the passageways through the stator cap do not cool the converter; they only provide a route for oil to circulate so the cooling process is more efficient.

Why Do Some Converters Have Dark Oil Inside the One-way Clutch Cavity of the Stator, but Have Pristine Oil Throughout the Rest of the Converter? 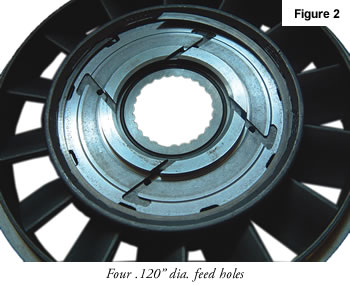 Most late model converters are being built with entrance and exit ports in the one-way clutch area. You may have noticed that four .120" holes were added to both stator caps in the 258mm front wheel drive GM converters (Figure 2).

An even more dramatic difference can be found in the GM 13" converters. Compare the early stator and late stator designs found in GM 13" converters (Figure 3). It is easy to see how the addition of five large passageways will improve oil flow through the one-way clutch.

Don't miss Part 3 of this series which wraps up the discussion of the importance of converter oil flow paths and methods for achieving good flow.