Part One of a Three-Part Series

One of the more frequently asked torque converter questions is about the .028" orifice (Figure 1) found in some General Motors 298mm and 300mm TCC pistons with carbon weave lining.

Converter rebuilders want to know why some of the pistons have the orifice and some do not. The answer to this question begins with understanding why the orifice was used in the first place. The orifice was drilled through the piston to help cool the mass of the converter. The TCC release passage is open to exhaust when the converter is in the TCC apply mode. Metered oil, which is allowed to bypass the piston by way of the orifice, carries some heat away from the converter.

The Original Equipment Manufacturer (OEM) later discovered that the loss of clamping force, caused by the leakage through orifice, was not worth the extra cooling gain. For this reason the orifice is being phased out of production and will not be in new models. The TCC pistons in some foreign converters also had a similar orifice, but only in a limited number of applications. Today, the best approach for a rebuilder is to close the orifice with a small tig weld (Figure 2).

Another popular torque converter question is about the three .185" diameter holes (Figure 3) in the 300mm turbines. 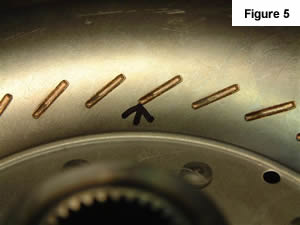 secondary path for balance oil (Figure 4). That path is not open in 300mm converters because their turbines are furnace brazed, which closes the holes (Figure 5). The three .185" holes provide the secondary oil path. Keep this in mind the next time you are using a furnace brazed turbine to build a performance converter. You may want to add a few holes to balance forward thrust.

The amount of oil needed to balance the thrust loads on the turbine seems to be fairly consistent. The three .185" holes in the 300mm turbine will pass about 26.8 GPM at 80 PSI at 180°F. The four .165" holes in the Allison 1000 converters will pass 28.4 GPM under the same conditions. A similar amount of oil was able to pass through the gaps at the end of the vanes on the 298mm turbines.

Don't miss Part 2 which covers the holes that allow oil to pass through the stators and turbine hubs.