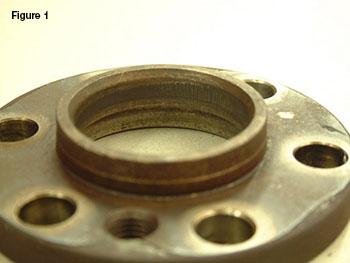 Most torque converter rebuilders routinely deal with the undersize pilots on GM 298mm converters. It is common either to build up the pilot by welding and then re-machine, or to sleeve the pilot area. The issue is so widespread that the repair is a requirement on the OE remanufactured converter process.

The reason 298mm converters have pilot wear issues is that the surface area on the pilot, which is used to center and support the converter, is not large enough to support the weight. You might expect the mating part of a high-wear item also to have wear issues, but in this case, the mating part that supports the 298mm pilot is the cavity in the end of the crankshaft. Fortunately, the crankshaft has better wear characteristics than the converter pilot and does not require repair as often.

Today, the converter for 4L80-E transmissions is having wear issues similar to what is common in the 298mm converter, along with some additional complications. Once again, the primary reason for the wear issues is a support-area-to-weight problem. 4L80-E converters are heavier than the 298mm converters and do not have much more piloting surface area. To make things worse, on some models the mating surface at the engine also is having wear issues. The models affected are 4L80-E equipped GM vehicles with V8 gasoline engines, 1999 to present. On these models the converter pilot does not center in the crankshaft itself, but instead is supported by a spacer sandwiched between the crankshaft and flex plate. This spacer (GM Part #12563532) costs about $37, and more often than not will need replacing during an R & R. The wear visible on the spacer in Figure 1 caused it to be .017” oversize. 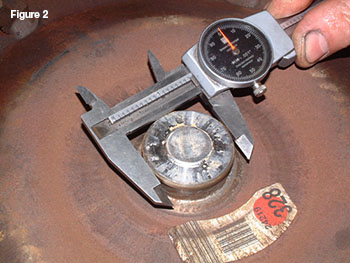 Wear in the I.D. of the spacer is the root cause of most of the cracked flex plates frequently found in these units. The I.D. of the bore should be measured during every R & R. It would be a good idea for converter rebuilders to include a reminder with each 4L80-E converter. This could prevent an unnecessary comeback for the transmission shop as well as the converter builder.

The pilot O.D. and spacer bore I.D. should be measured in at least two positions, approximately 90° apart (see Figure 2).

Clearance beyond .005" maximum should be corrected. A go-no go gauge is not a suitable method of measuring the pilot or spacer bore, because it will pass too many defective parts.