A 2003 F350 4X4 was brought to a transmission shop in Eugene, Oregon. The customer complaint was an intermittent P0741 code. The code did not seem to occur when the vehicle was driven locally, but happened every time the vehicle was taken on a longer trip. The customer also noticed that the code would set whenever any additional load was placed on the vehicle. The additional loads included traveling in hilly terrain or pulling a trailer. The vehicle's transmission had been rebuilt at the same transmission shop about a year earlier and a rebuilt torque converter had been installed at that time. During the transmission rebuild procedure a few mild performance enhancing modifications were added, but other than that, it was a basic overhaul. The customer said that the lock-up worked fine for about 300 miles, but then complained that the lock-up was too soft. The soft lock-up feel continued until the present P0741 code issue. A scan check did not find any additional codes and a road test with the scanner showed that there was sufficient TCC slip to set the code. All of the routine "in vehicle" checks were performed and the cause of the problem was believed to be the converter.

The transmission shop had changed hands during the past year, but the new owner was familiar with the customer and was willing to stand by the warranty. The transmission and converter were removed from the vehicle. The new shop owner had changed his torque converter supplier since acquiring the shop, so the torque converter did not go back to the original rebuilder. The converter was sent to the shop's new supplier, Oregon Converter Company. Ken Cluck, the production manager at Oregon Converters, had the converter cut apart. The end play and clutch release clearances were within specifications, and the clutch did not look like it had been slipping. Ken was convinced that the TCC slip problem was originating outside of the converter, but as an extra measure of insurance, a new clutch piston was installed.

The transmission and converter were put back into the vehicle and the vehicle was road tested. The extensive road test covered all types of terrain, including several hilly areas. Since the TCC slip condition did not return during the road test, Ken felt that the problem had been resolved, even though he had not found anything conclusive inside the converter.

The vehicle was returned to the customer and once again, it performed well for about 300 miles. After 300 miles the TCC apply feel again began to soften. By the time the vehicle was returned to the transmission shop, the data stream was showing enough TCC slip that the return of the P0741 code was inevitable. Since the converter reacted in much the same way as it did after the first rebuild, Ken felt he needed to take a closer look. 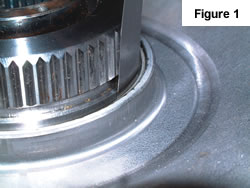 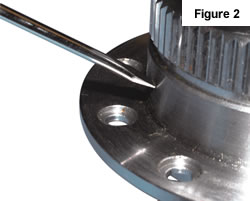 When the Oregon Converter Company rebuilt the converter, they reused the turbine hub, which looked like new. The turbine hub had been replaced by the original rebuilder. Unfortunately, the surface finish on the turbine hub, where the bushing in the I.D. of the TCC piston rides, was rough enough to wear the bushing out prematurely. The surface finish for this area should be in the 10 to 20 RA range. The surface finish on this turbine hub exceeded the profilometer's maximum reading of 200 RA, and a good guess would put this turbine hub's finish at about 300 RA. The finish was rough enough to catch a fingernail but was difficult to detect visually. In fact, the O.D. of the problem turbine hub measured the same as an OE hub, and felt smooth when you ran your finger around the circumference. If you do not have a profilometer, the best method of checking for smoothness is to run your fingernail across the surface, or place your pocket screwdriver at a 45 degree angle to the surface and push it across the surface (Figure 2).

Most converters rely on an O-ring or lathe cut seal to control oil flow between the turbine hub and TCC piston. Because the 4R100 or 5R110W converters do not have any seal in this area, it becomes critical that this clearance be measured during the rebuild process.

Special thanks to Ken Cluck, Production Manager at Oregon Converters for sharing his story and information.